Items related to Space, Geography, and Politics in the Early Roman Empire... 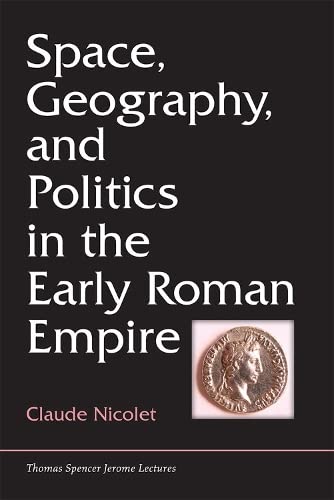 Brilliant in conception and flowing in style, Space, Geography, and Politics in the Early Roman Empire documents Roman expansion in what came to be the beginnings of the early imperial period. In an inimitable way, the author of this groundbreaking work explores how Romans came to map the world they knew and conquered. Claude Nicolet studies both the agrimensores, who in the state’s interest took care to observe and record territories for Britain to the farther reaches of Asia Minor, and M. Vipsanius Agrippa, the sometime son-in-law of the Emperor Augustus.

In this absorbing study Nicolet sets forth the integral relations between territorial expansion and political expansion, as well as between propaganda cultivated in the national interest and propaganda designed to secure the status of the princeps as primus inter pares, first among equals.

Unique in presentation, drawing upon unexpected texts both ancient and modern, Space, Geography, and Politics in the Early Roman Empire offers startling new insights into the character of Rome and its princeps-cum-king, Augustus.

Claude Nicolet was Professor at the Sorbonne, Directeur d’Études of École Pratique des Hautes Études (IVe Section), and of the Centre Gustav Glotz in Paris, France. He was also a Chevalier de la Légion d’Honneur.

1. Space, Geography, and Politics in the Early Roman Empire