Items related to Scam Dogs and Mo-mo Mamas: Inside the Wild and Wooly... 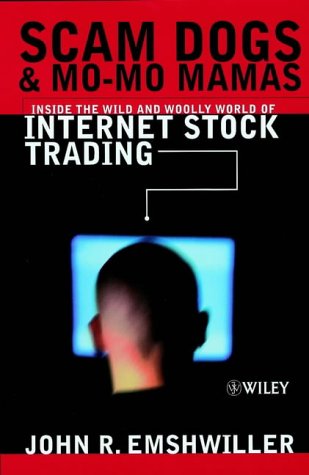 A burrito maker and bon vivant called Tokyo Joe
A very big textile–coatings salesman named Big Dog
A bankrupt heating contractor who styles himself as Georgia Bard
Meet the new leaders of the twenty–first–century stock market–each an Internet stock–trading legend. Each a cyber–guru in the vanguard of the millions of trading and talking about stocks on the Internet. Each with legions of eager followers and determined foes, and the ability to make stock prices leap–or plummet–at the click of a mouse. Colorful, charismatic, and often outrageous, they are reshaping the way we invest and how Wall Street works.
Scam Dogs and Mo–Mo Mamas is their story–the first journalistic look at these market wizards and their brave new world. Veteran Wall Street Journal reporter John Emshwiller has entered that world and brought back a lively, entertaining tale, documenting their rise, the culture they′ve created, their intertwined lives, and their power, influence and turf battles.
Pitted against the cyber–gurus, and a major part of this story, are the self–appointed truthsayers who seek to expose their excesses, Web officials who try to keep order in cyberspace, and enforcement officials from the SEC, who are beginning a government crackdown.
Though these Internet voyagers rarely meet or even share a spoken word, their lives and passions have all met in cyberspace. There, they befriend or battle each other in pursuit of fame and fortune. They operate in a realm without substance that can be powerfully, even frighteningly, real. There, it is as easy to be entertained as it is to be fleeced. Of course, if you are very good and very lucky, you might just strike it rich.
Welcome to the wild and woolly world of Internet stock trading–where the rules are still being written, nothing is as it seems, and everything is up for grabs.

Would you take a stock tip from a guy named Tokyo Joe? How about one called Big Dog? If so, you should read this book. If not, you will probably find Scam Dogs and Mo-Mo Mamas a very entertaining curiosity about people you're glad you're not. Tokyo Jo and Big Dog are two of the main characters in Scam Dogs. They post messages on Internet stock discussion boards, touting the stocks of companies most of us have never heard of. When these guys say "buy," thousands do. The problem for those thousands is that the gurus may have done all their own buying before recommending a stock to others, and start selling as soon as their followers start buying. At least, that's what the Securities and Exchange Commission accused Tokyo Joe of doing, when it filed a civil complaint against him in January 2000. (This practice, according to the helpful glossary at the back of the book, is called "scalping.") Emshwiller is a Wall Street Journal reporter who has covered numerous frauds and swindles on assignment--in fact the book started as a Journal article about the colourful Tokyo Joe (How colourful? He usually trades naked in his Manhattan apartment, sitting in the lotus position while staring at multiple computer screens.) Scam Dogs will be most useful to those contemplating a career in day trading--however, when you see how many ways there are for people to fleece you, you may decide it's a lot more remunerative not to become a sheep. --Lou Schuler

"Those intrigued by the mysteries of Internet stock trading will want to take John Emshwiller′s tour of a frantic, self–absorbed universe, where there are no fringe players because there is no fringe."––Julie Salamon, , The Devil′s Candy
"In uncovering some of the scandals and cold–minded manipulations of Internet stock–trading world. John Emshwiller has produced the equivalent of a skull hung beside a trail–a warning to all who enter this realm that there is danger here and nothing is quite what it seems."––Erik Larson, , Isaac′s Storm: A Man, a Time, and the Deadliest Hurricane in History
"Only a superb investigative journalist like John Emshwiller could reveal the fascinating underside of the online day–trading phenomenon. Everyone who trades this way should read this book before buying or selling one more share."––Walter S. Mossberg, Personal Technology Columnist, Wall Street Journal

"...Brings the world of online trading to life for the uninitiated. Vital reading for anyone contemplating day trading on the Internet."
–– Gulf Business, September 2000

"This is a well–written, fascinating, cautionary tale which examines the seductive nature of power, and people′s willingness to believe in these latter–day icons."
–– Portfolio International, October 2000

"For an entertaining read on message boards and their denizens, have a look at Scam Dogs & Mo–Mo Mamas."
––FT Expat, April 2001

Book Description Hardcover. Condition: Used; Good. **SHIPPED FROM UK** We believe you will be completely satisfied with our quick and reliable service. All orders are dispatched as swiftly as possible! Buy with confidence! Greener Books. Seller Inventory # 4142748

Scam Dogs and Mo-Mo Mamas: Inside the Wild and Wooly World of Internet Stock Trading

Book Description Condition: Good. This is an ex-library book and may have the usual library/used-book markings inside.This book has hardback covers. In good all round condition. Please note the Image in this listing is a stock photo and may not match the covers of the actual item,700grams, ISBN:9780471497349. Seller Inventory # 9552864