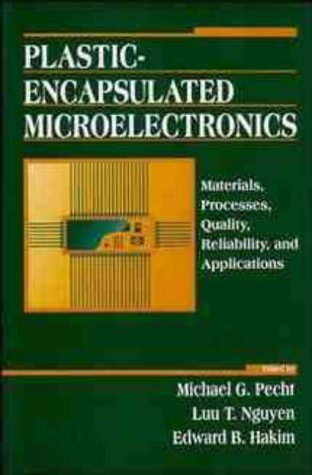 The past twenty years have seen many important advances in plastic encapsulated microelectronics (PEM) technology. Thanks to new packaging materials, improved design, increased reliability testing, and other important developments, PEMs are now perceived as a dependable and, in many cases, more cost–effective option for a wide range of electronic systems applications. Nevertheless, there continues to be a surprising dearth of authoritative references on the subject. Until now, professionals in search of detailed information about the latest developments in PEM design and production have had to waste valuable time browsing through countless professional journals, monographs, and databases.

For the first time between two covers, here is a comprehensive, critical review of the state of the art in PEMs and assemblies that incorporate them. The most timely book on the subject, it provides professionals with a systematic, scientific exploration of crucial technical and reliability issues concerning the manufacture and use of PEMs—with special attention focusing on environment–specific applications. Among the important topics covered in detail:

Plastic–Encapsulated Microelectronics is an indispensable resource for researchers and practicing mechanical and electrical engineers working in the electronics, aerospace, and automotive industries, in space agencies, or in the defense industry.

MICHAEL G. PECHT is a tenured faculty member at the University of Maryland with a joint appointment in systems research and mechanical engineering. He is Chief Editor of the IEEE Transactions on Reliability and is on the editorial board of the Journal of Electronics Manufacturing and the IEEE SPECTRUM. Dr. Pecht is a Professional Engineer and an IEEE Fellow with a BS in acoustics, an MS in electrical engineering, and an MS and PhD in engineering mechanics from the University of Wisconsin. Dr. Pecht is the Director of the CALCE Electronic Packaging Research Center.

LUU T. NGUYEN received his PhD in mechanical engineering from MIT in 1984 on a John and Fannie Hertz Foundation Fellowship. He is currently a program manager with the Package Technology Group at National Semi–conductor Corp., Santa Clara, California, working on several ARPA and Department of Defense–funded contracts on MCMs, single chip packaging assembly reliability, and design manufacturing issues. He also serves as a Packaging Technical Advisory Board member for the Semiconductor Research Corporation. Previously, he was with the Philips R&D Center in Sunnyvale, California, and the IBM T. J. Watson Research Center in Yorktown Heights, New York. He has 5 book chapters, 7 patents, 15 invention disclosures, over 70 technical papers, and over 40 general science story features. He is a coeditor of two books. He has two Best Paper Awards and several technical awards from NASA for design work on the Viking and Mars Orbiter spacecrafts while interning atthe Jet Propulsion Laboratory, Pasadena.

EDWARD B. HAKIM is chief of the Reliability, Testability and Quality Assurance Branch, Electronics Tech–nology and Devices Laboratory, U.S. Army Laboratory Command, Fort Monmouth, New Jersey. For more than 30 years, he has been involved in Army microelectronics and semiconductor reliability R&D. Mr. Hakim has presented more than 50 technical papers and has written the text, Micro–electronic Reliability, Volume I: Reliability, Test, and Diagnostics. He has served on numerous committees, including the Defense Science Board Task Force on Commercial Components– Electronic Devices, the Department of Defense (DoD) Industry Task Force on Electrostatic Discharge, the DoD Microcircuit Planning Group, and the DoD/Industry Coordination Working Group on Generic Qualification.

This study addresses issues relevant to PEM devices and the assemblies that incorporate PEMs, including materials, processes, screens, tests, failure mechanisms, reliability and the applications of PEMs that may be specific to environmental conditions. The text documents existing research and supports all activities that are currently underway throughout the world to establish the universal applicability of PEMs.