Items related to Warren Buffett Speaks: Wit and Wisdom from the World's... 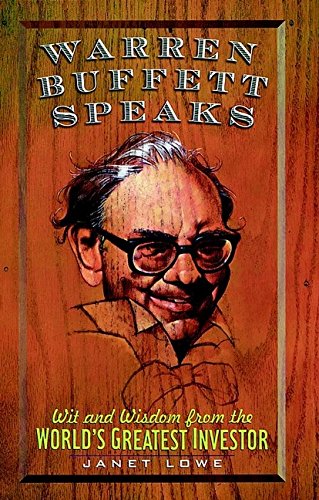 The world takes note when WARREN BUFFETT SPEAKS: "If people want to improve their investing skills, it has to help to study how the Master does it. This short book outlines Buffett's philosophy and techniques." - Peter S. Lynch, Vice Chairman Fidelity Investments "Common sense with a deft irony ..." - John C. Bogle, Chairman The Vanguard Group of Investment Companies "It was Warren Buffett's thoughts and philosophy that first captivated investors. Janet Lowe has done us all a great service by collecting and arranging Warren Buffett's wit and wisdom in an easy-to-read and enjoyable book." - Robert G. Hagstrom, Jr. Portfolio Manager, Focus Trust author of The Warren Buffett Way "A must-read. Buffett's wit and wisdom is a roadmap for anyone looking to succeed in business, investing, and life." - Steve Halpern Editor and Publisher Dick Davis Publishing "With enough insider information and a million dollars, you can go broke in a year." "What I am is a realist. I always knew I'd like what I'm doing. Oh, perhaps it would have been nice to be a major league baseball player, but that's where the realism comes in." "If a graduating MBA were to ask me, 'How do I get rich in a hurry?' I would not respond with quotations from Ben Franklin or Horatio Alger, but would, instead, hold my nose with one hand and point with the other toward Wall Street." Discover life's little secrets of success as revealed by the world's greatest investor. In this wise and winning collection of quotes, writings, and favorite sayings, Warren Buffett Speaks on diverse subjects such as investing, running a business, honesty, schoolteaching, paying taxes, and much, much more. Assembled by bestselling author Janet Lowe - and including a wealth of previously unpublished material - this unprecedented peek into the financial genius's wildly profitable philosophy is often surprising, always intriguing, and sparked throughout by Buffett's unique combination of savvy business smarts and wry wit. Here's just a sample of what you'll find inside: "Wall Street is the only place that people ride to work in a Rolls Royce to get advice from those who take the subway." "All there is to investing is picking good stocks at good times and staying with them as long as they remain good companies." "Maybe grapes from a little eight acre vineyard in France are really the best in the world, but I always had a suspicion that about 99 percent of it is in the telling and about 1 percent of it is in the drinking." "I want to explain my mistakes. This means I do only the things I completely understand." "In the end, I always believe my eyes rather than anything else."

"Warren Buffett Speaks is a highly agreeable collection of Buffett quotes, ordered by subject. From an education point of view, it ranks as high as anything else you will find". -- Shares, 12th April 2001

JANET LOWE's previous books include the bestselling Benjamin Graham on Value Investing, Value Investing Made Easy, and The Secret Empire. Her hundreds of articles have appeared in such publications as Newsweek, The Christian Science Monitor, the Los Angeles Times, and the San Francisco Chronicle. Ms. Lowe lives in Del Mar, California, with her husband, Austin Lynas.