Items related to Turbulent Skies: The History of Commercial Aviation... 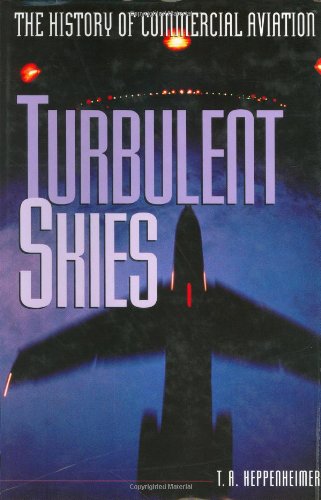 a gripping, in-depth look at how America's $200 billion aviation industry took flight "To understand the industry, this is necessary reading." --The Miami Herald "With the precision of a scientist, a good reporter's marshaling of disparate facts, and the vigor of a natural storyteller, Heppenheimer offers an absorbing narrative." --Richard Snow, Editor American Heritage. "Tom Heppenheimer tells a fascinating story." -- R. T. Jones Inventor of the swept wing. "An important addition to the history of technology as well as business." -- Publishers Weekly. "An airworthy briefing firmly grounded in the applied science and allied realities that permit air transport of passengers and cargo over long distances and high speeds." -- Kirkus Reviews.

Chronicling the meteoric rise of commercial aviation, Turbulent Skies is a riveting, multifaceted tale of daredevils and innovators, of the power and pitfalls of big business, and of the awe-inspiring achievements of modern technology. Based on extensive research and dozens of interviews, this in-depth look at the most dynamic industry of the twentieth century unfolds with the sweep and drive of a fast-paced novel.

Turbulent Skies opens just after World War I, when intrepid aviators in fragile biplanes navigated by following railroad tracks. In Europe, with many overland routes in ruins, air transport provided a vital link for supplies and communication. And in America, as the escapades of the famous barnstormers thrilled a curious public, adventurers, entrepreneurs, and politicians alike seized upon the novelty . . . and earning potential. Commercial aviation came of age, and acclaimed author T. A. Heppenheimer takes us step-by-step through the ensuing decades, as discovery, development, and expansion bring the industry to its current globe-spanning status—with an annual revenue of $200 billion.

Turbulent Skies comes alive with a wealth of fascinating personalities. Many of these names are familiar; some are legendary: William Boeing, Henry Ford, Howard Hughes, Amelia Earhart, and, of course, Charles A. Lindbergh. Alongside these icons are such equally intriguing figures as Juan Trippe, under whose guidance Pan Am set the industry pace for more than forty years; Jack Northrop, whose revolutionary monoplane launched Lockheed; Cyrus R. Smith, autocratic president of American Airlines, who advanced the concept of passenger air travel; and the controversial Frank Lorenzo, whose willfully destructive war against the unions brought down Eastern Airlines.

Charting a course marked by both spectacular successes and dramatic failures, Turbulent Skies is a penetrating examination of the workings of big business. The intense competition to create bigger, better, faster planes would lead to a furious professional duel of development between Douglas and Boeing—with the landmark Boeing 707 as the result. We see the giant Pan Am, once the largest international airline as well as the biggest carrier in the United States, proudly lead the industry into the jet age, only to end in collapse. The sophisticated SST that was to revolutionize air travel becomes, instead, a monumental miscalculation.

In addition, Heppenheimer explores the connection between government—a key player—and business in the development of aviation. In the early days, the U.S. government's portioning out of mail contracts amounted to indirect subsidy, while in Europe, the ancestors of Air France, Lufthansa, and British Airways were given direct subsidies to remodel World War I bombers for passenger transit. World War II provided the impetus to develop new technology, notably the jet engine, and in the postwar years, planebuilders relied heavily on military contracts to test technological advances before introducing them into commercial aviation.

Above all, Turbulent Skies is a thrilling look at the amazing achievements of aviation technology. While twin engines, turboprops, and the Concorde SST are among the marvels that already have become reality, Heppenheimer looks to a future where space satellites will transmit landing signals and high-level air traffic control systems will be housed on board aircraft.

Compelling and informative, Turbulent Skies will enthrall aviation buffs and prove a valuable resource for all those interested in business and technology in the twentieth century.

"With the precision of a scientist, a good reporter's marshaling of disparate facts, and the vigor of a natural storyteller, Heppenheimer offers an absorbing narrative."— Richard Snow, Editor American Heritage

"He manages his cavalcade of facts and unforgettable personalities with a ringmaster's versatility and the sure discipline of a scholar." -Air & Space "To understand the industry, this is necessary reading." -Miami Herald Now in paper! Here is a gripping, in-depth look at how America's USD200-billion aviation industry took flight-from rickety, post-World War I biplanes that navigated by following railroad tracks to today's supersonic airliners that carry half a billion passengers a year. The story of one of the most exciting industries of our time profiles the successes of such industry leaders as Boeing, American, United, and Delta and the demises of Pan Am, TWA, and Eastern. Heppenheimer also brings to life colorful, outspoken aviation leaders such as Juan Trippe, Howard Hughes, Donald Douglas, and Frank Lorenzo. T.A. HEPPENHEIMER (Fountain Valley, California) has written extensively on aerospace, business, and the history of technology. He is the author of five books, including Countdown: A History of Space Flight (Wiley), The Man-Made Sun, The Real Future, and Toward Distant Suns.