Items related to Onward: How Starbucks Fought For Its Life Without Losing...

Schultz, Howard; Gordon, Joanne Onward: How Starbucks Fought For Its Life Without Losing Its Soul

Onward: How Starbucks Fought For Its Life Without Losing Its Soul 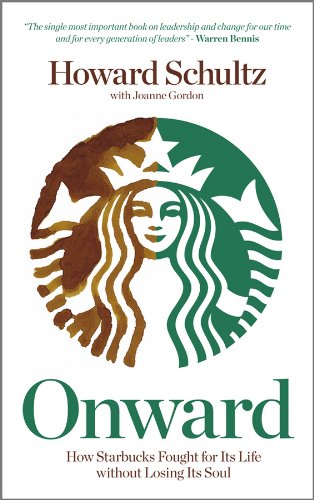 In 2008, Howard Schultz, the president and chairman of Starbucks, made the unprecedented decision to return as the CEO eight years after he stepped down from daily oversight of the company and became chairman. Concerned that Starbucks had lost its way, Schultz was determined to help it return to its core values and restore not only its financial health, but also its soul. In Onward, he shares the remarkable story of his return and the company's ongoing transformation under his leadership, revealing how, during one of the most tumultuous economic times in history, Starbucks again achieved profitability and sustainability without sacrificing humanity. Offering readers a snapshot of a moment in history that left no company unscathed, the book zooms in to show, in riveting detail, how one company struggled and recreated itself in the midst of it all. The fast paced narrative is driven by day-to-day tension as conflicts arise and lets readers into Schultz's psyche as he comes to terms with his limitations and evolving leadership style. Onward is a compelling, candid narrative documenting the maturing of a brand as well as a businessman. Onward represents Schultz's central leadership philosophy: It's not just about winning, but the right way to win. Ultimately, he gives readers what he strives to deliver every day- a sense of hope that, no matter how tough times get, the future can be just as or more successful than the past, whatever one defines success to be. "Through the lens of his personal leadership journey, with all of its dizzying ups and agonizing downs, Howard Schultz has written, with aching honesty and passion, the single most important book on leadership and change for our time and for every generation of leaders. This book is not just recommended reading, it's required." Warren Bennis, Distinguished Professor of Business, University of Southern California, and author of the recently published Still Surprised: A Memoir of a Life in Leadership "[This] sequel t

a compelling story gripping stuff. (Management Today, May 2011). the story of how [Howard] stabilised the company and brought it back to its core values. (Bookbag.co.uk, May 2011). a tale of derring-do, traversing the globe and crowded with a cast of exceptional people the book is testament to [Howard s] drive and dedication. (Financial Times, May 2011). The book is useful for anyone interested in leadership, management, and building a consumer brand. (The Market, May 2011). an insight into the challenges faced by anyone keen to build a socially conscious business that is also highly profitable. (Director.co.uk, June 2011). Schultz s story is incredible a book that shows big brands still have passionate beating hearts. (Management Today, September 2013)

On February 26, 2008, customers at 7,100 Starbucks stores in the US were asked to leave. For the next three hours every barista in every Starbucks was retrained in the art of making the perfect espresso. The act was unprecedented, but proof of just how dire things were becoming at a company that could once do no wrong.

For more than three decades, Starbucks had a storied history of being a great place to work, of ethically sourcing and roasting the highest–quality coffee beans, and of crafting beverages for millions of customers who went to Starbucks for coffee and for a sense of community. But by 2008, after years of focusing on rapid expansion, the traits that made Starbucks successful were in jeopardy. Sales started to slide at a distressing rate. The stock price was falling. The company′s very survival was at risk.

To address the emerging problems, former chief executive officer Howard Schultz, who had stepped aside almost eight years earlier to become chairman after growing Starbucks from 11 stores to thousands, did something no one expected: He returned as CEO to oversee day–to–day operations. His goal was not just to stabilize the company, but to transform it by refocusing on core values and reigniting the innovation required to thrive in a dramatically shifting marketplace, all while fending off harsh critics and huge competitors.

Schultz came back with passion and a plan, and in the course of two years–even in the face of painful revelations about internal troubles and a worsening economy–Starbucks astonishingly returned to sustainable, profitable growth.

Onward is the remarkable story of that transformation. Schultz offers readers an extraordinarily intimate look at his daily decision–making process, from closed–door planning sessions in Seattle, to conversations with coffee farmers in Rwanda, to investor presentations in New York during the worst of the economic turmoil.

Onward is more than just a business book. Personally inspiring and unexpectedly candid, it brings a dramatic story to life with the emotional power and narrative suspense of a novel.

"Through the lens of his personal leadership journey, with all of its dizzying ups and agonizing downs, Howard Schultz has written, with aching honesty and passion, the single most important book on leadership and change for our time and for every generation of leaders. This book is not just recommended reading, it′s required."
Warren Bennis, Distinguished Professor of Business, University of Southern California, and author of the recently published Still Surprised: A Memoir of a Life in Leadership

"Howard Schultz′s refreshingly candid, compelling narrative demonstrates what it takes to lead in these extraordinary times. Onward is a rare firsthand account of how one of the world′s most iconic brands overcame the challenges that confront us all."
Indra Nooyi, Chairman and CEO of PepsiCo

"The second toughest thing in business is building a successful enterprise–the toughest is to engineer a turnaround and still maintain the core culture and values of the organization. This is a classic example of how it can be done. Howard has proven it′s not enough to be smart or well intentioned–sustained success will not occur without true passion from the very top!"
Jim Sinegal, cofounder and CEO of Costco

Starred Review: "[This] sequel to the founding of Starbucks is grittier, more gripping, and dramatic, and [Schultz′s] voice is winning and authentic. This is a must–read for anyone interested in leadership, management, or the quest to connect a brand with the consumer."
Publishers Weekly

1. Onward How Starbucks Fought for Its Life Without Losing Its Soul

2. Onward How Starbucks Fought for Its Life Without Losing Its Soul

3. Onward How Starbucks Fought for Its Life Without Losing Its Soul