Items related to A History of Modern Germany: 1800 to the Present

Kitchen, Martin A History of Modern Germany: 1800 to the Present

A History of Modern Germany: 1800 to the Present 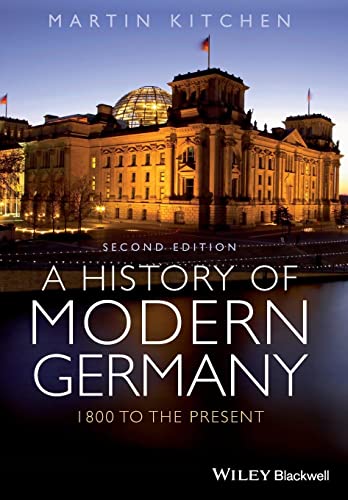 Featuring revised and extended coverage, the second edition of A History of Modern Germany offers an accessible and engagingly written account of German history from 1800 to the present. * Provides readers with a long view of modern German history, revealing its continuities and changes * Features updated and extended coverage of German social change and modernization, class, religion, and gender * Includes more in depth coverage of the German Democratic Republic * Examines Germany's social, political, and economic history * Covers the unification of Germany, the German Empire, the Weimar Republic, the Third Reich, post-war division, the collapse of Communism, and developments since re-unification * Addresses regional history rather than focusing on the dominant role of Prussia

This second edition of A History of Modern Germany offers a comprehensive overview of German history from its transformation as a loose patchwork of states in 1800 to its emergence as the most powerful unified nation in Europe today.

The narrative begins with the Napoleon's impact on a fragmented Germany, tracing the development of a national consciousness, and the tensions between reform and reaction, culminating in national unification. The book addresses the tumultuous events from Germany's past, including the rise and fall of the German Empire, the failure of the Weimar Republic, the twelve fateful years of the Third Reich, the division of post-war Germany, the collapse of Communism and developments since reunification.

For this new edition, distinguished historian Martin Kitchen delves deeper into issues relating to Germany's social structure to offer additional insights into the complexities of Germany's turbulent history. He also examines the course of the German Democratic Republic in greater depth, and reflects on the country's current internal challenges and its evolving role within the wider international community.

4. A History of Modern Germany

9. A History of Modern Germany (Paperback)

Book Description 2011. Paperback. Condition: New. 2nd. Paperback. Featuring revised and extended coverage, the second edition of AHistory of Modern Germany offers an accessible and engaginglywritten account of German history from 1800 to the present. Pro.Shipping may be from multiple locations in the US or from the UK, depending on stock availability. 440 pages. 0.724. Seller Inventory # 9780470655818

10. A History of Modern Germany