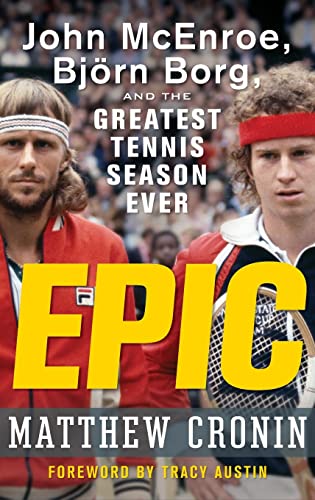 The epic 1980 Wimbledon final that ended with John McEnroe′s defeat by his idol, Bjorn Borg, is considered the greatest tennis match ever. The U.S. Open final later that year, when McEnroe got his revenge, is considered the greatest U.S. Open ever. These two matches marked McEnroe′s transformation from tennis player into an American icon, the high point of tennis′s gigantic leap into the national consciousness, and the beginning of Borg′s rapid and surprising decline. This book takes you back to that amazing summer at the height of the golden age of tennis.

Whether you′re a longtime tennis fan or a recent convert, Epic will give you a deeper understanding of the game and of two of the most amazing players ever to have played it.

In the late 1970s, professional tennis held a firm grip on the United States, and no two players better personified the sport′s growth than cool–as–ice Swede Borg and brash New Yorker McEnroe. In his first book, Fox Sports tennis columnist Cronin captures a series of pivotal events in the evolution of the sport from European to American dominance, from wood to metal racquets, and from staid players to a colorful cast of supporting characters including Ilie Nastase, Vitas Gerulaitis, Jimmy Connors, and Guillermo Vilas. Despite its misleading subtitle, Epic recounts much than that magical 1980 season, with the marathon 1980 Wimbledon final serving as Cronin′s hook. In that match, the veteran Borg (en route to his record fifth consecutive Wimbledon title) outlasted the upstart Mac (who grew up with a Borg poster on his bedroom wall) in a five–set showdown. Chapters containing point–by–point analysis of that match take advantage of the author′s seasoned knowledge of the game, and a lengthy denouement recounts Mac′s revenge against Borg at the 1980 U.S. Open. Although it appears he didn′t have personal access to his protagonists, Cronin gets to the heart of Borg′s genius and explores the catalyst for McEnroe′s ugly on–court temperament, while providing context with historical and pop–culture references and mostly avoiding melodramatic play–by–play prose. (Apr.) ( PublishersWeekly.com, 16 May 2011)

"Like the subjects he so deftly profiles, Matt Cronin brings his A–game to bear. Alternately a dual biography, a riveting account, a psychological profile, and a compelling study in contrasts, Cronin′s book shows why McEnroe–Borg lives as one of sport′s enduring rivalries. Tennis writing at its best."
Jon Wertheim, Sports Illustrated, author of Strokes of Genius: Federer, Nadal, and the Greatest Match Ever Played

"Epic is an appropriate title indeed. 1980 was a resplendent season in the history of the sport, and Matt Cronin brings it all back to us in these entertaining pages. Many of the game′s most notable names weigh in with memories and insight that explain and explore a truly remarkable time in tennis."
Mary Carillo

"As much as anyone in tennis, Matt Cronin has his finger on the pulse of the game. In Epic, he uses his vast insider′s knowledge to capture the seminal moment of the seminal rivalry in the booming post–amateur era."
Doug Robson, lead tennis writer, USA Today

"Thirty years later, John and Björn still captivate us. Matt Cronin takes us from their beginnings through the magic summer of 1980. Rivals then and great friends now, John and Björn crafted a story for the ages which Matt captures brilliantly."
Ted Robinson, NBC Sports/Tennis Channel

Book Description Hardcover. Condition: New. Hardcover. A top tennis writer tells the story of the greatest Wimbledon, the greatest U.S. Open, and the greatest rivalry in the history of the gameThe epic 1980 Wimbledon final that ended with John.Shipping may be from multiple locations in the US or from the UK, depending on stock availability. 304 pages. 0.594. Seller Inventory # 9780470190623