Items related to America's Forgotten Majority: Why the White Working... 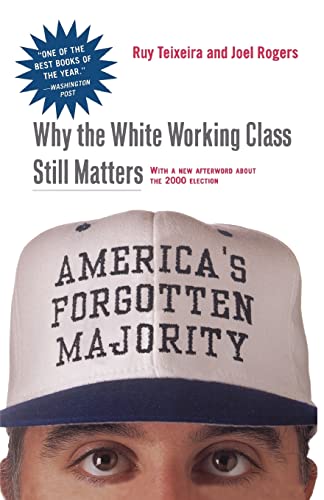 A powerful look at the real America, dominated by America's "forgotten majority"-white working-class men and women who make up 55 percent of the voting population

Ruy Teixeira is a senior fellow at The Century Foundation. He is the author of several books, including The Disappearing American Voter, and of numerous articles in publications ranging from scholarly journals to the New York Times, the Washington Post, The Atlantic Monthly, The American Prospect, and The New Republic.Joel Rogers is Professor of Law, Political Science, and Sociology at the University of Wisconsin-Madison, where he also directs the centre on Wisconsin Strategy. The author of many academic books and articles, he is also a contributing editor at The Nation and Boston Review, and a longtime social and political activist.

Book Description 2001. Hardcover. Condition: New. Hardcover. A powerful look at the real America, dominated by America's forgotten majority-white working-class men and women who make up 55 percent of the voting population. A powerful lo.Shipping may be from our Sydney, NSW warehouse or from our UK or US warehouse, depending on stock availability. 232 pages. 0.263. Seller Inventory # 9780465083992