Items related to Strange Rebels: 1979 and the Birth of the 21st Century

Caryl, Christian Strange Rebels: 1979 and the Birth of the 21st Century

Strange Rebels: 1979 and the Birth of the 21st Century 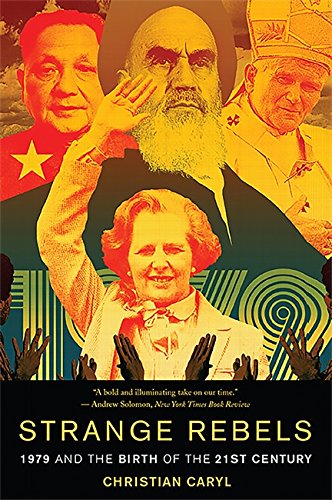 "If you haven't thought much about the year 1979, it's time you should. In this provocative work of scholarship and reporting, Christian Caryl argues that this was the year when a counter-revolution-led by Margaret Thatcher, John Paul II, Ayatollah Khomeini, and Deng Xiaoping-changed the course of history. After reading this book you won't think the same way about the 20th century again." (Anne Applebaum, author of Iron Curtain: The Crushing of Eastern Europe, 1944-1956) "At the end of the 20th century, two coiled forces, religion and markets, sprung onto the world stage. From China's reforms to Margaret Thatcher's rise to Ayatollah Khomeini's revolution, they all began in 1979 and have been shaping international life ever since. Christian Caryl tells the story of that pivotal year-and its consequences-with intelligence, grace and lucidity." (Fareed Zakaria) "Christian Caryl's book is eloquent, elegant, and persuasive. It makes a connection that is obvious once he points it out-about the transformations in the Middle East, central and east Asia, and Europe from West to East whose after-effects shape our politics, culture, and economy even now. After reading this book, I will always think differently about developments in Iran, Afghanistan, China, and elsewhere because of the connections Caryl has drawn out. This is a very valuable and readable work combining the best elements of history and high-end contemporary reportage." (James Fallows, author of China Airborne) "Christian Caryl takes a series of seemingly disparate events that shook the world of the late 1970s and uncovers the strands that bind them together. The result is an amazing story that illuminates the world we live in." (Dexter Filkins, author of The Forever War) "We knew something was happening in 1979. And now, thanks to Christian Caryl, we know what it was. A hands-on reporter with global experience, Caryl follows the common thread running through the seemingly unrelated upheavals in Britain, Poland, Iran, Afghanistan, and China that year, revealing a powerful revolutionary traditionalism that continues to shape the world we live in today. An eye-opening and deeply sobering book." (Mark Lilla, author of The Stillborn God: Religion, Politics, and the Modern West)"

"A timely new book... Anyone who wants to understand how this new world came into being needs to read Mr. Caryl's excellent book."-The Economist

Book Description INGRAM PUBLISHER SERVICES US, United States, 2014. Paperback. Condition: New. Reprint. Language: English. Brand new Book. Few moments in history have seen as many seismic transformations as 1979. That single year marked the emergence of revolutionary Islam as a global political force, the beginning of market revolutions in China and Britain that would radically alter the international economy, and the first stirrings of the resistance movements in Eastern Europe and Afghanistan that ultimately led to the collapse of the Soviet Union. In Strange Rebels , veteran journalist Christian Caryl shows how the world we live in today and the problems that plague it began to take shape in this pivotal year. Weaving the story of each of these counterrevolutions into a brisk, gripping narrative, Strange Rebels is a ground-breaking account of how these upheavals marked a startling conservative challenge to communist and socialist systems around the globe, giving birth to our modern age in the process. Seller Inventory # BZE9780465065677

Book Description 2014. Paperback. Condition: New. Paperback. Few moments in history have seen as many seismic transformations as 1979. That single year marked the emergence of revolutionary Islam as a global political force, the beginning of market .Shipping may be from multiple locations in the US or from the UK, depending on stock availability. 407 pages. 0.522. Seller Inventory # 9780465065677

Book Description 2014. Paperback. Condition: New. Paperback. Few moments in history have seen as many seismic transformations as 1979. That single year marked the emergence of revolutionary Islam as a global political force, the beginni.Shipping may be from our Sydney, NSW warehouse or from our UK or US warehouse, depending on stock availability. 407 pages. 0.522. Seller Inventory # 9780465065677