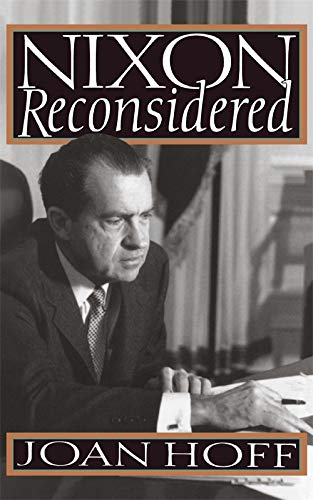 An eye-opening look at the man whose notoriety over Watergate and whose accomplishments in foreign policy have made us foget that he was one of our most innovative modern presidents on matters of domestic policy. Hoff shows that Nixon's reforms in welfare, civil rights, economic and environmental policy, and reorganization of the federal bureaucracy all greatly outweigh those things for which we tend to remember him.

Joan Hoff, professor of history at Indiana University and co-editor of the Journal of Women's History, is a specialist in twentieth-century American foreign policy and politics and in the legal status of American women. She was executive secretary of the Organization of American Historians from 1981 to 1989. She has been the recipient of numerous awards, includig the Berkshire Conference of Women Historians' Article Prize and the Stuart L. Bernath Prize for the best book on American diplomacy. She is the author of several books including Law, Gender, and Injustice: A Legal History of U.S. Women and Herbert Hoover: Forgotten Progressive.