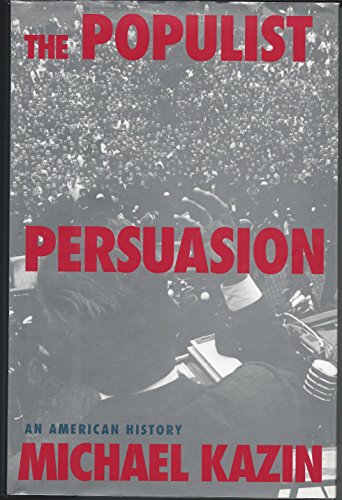 This text gives an account of populism in American politics from the Revolutionary War to the present day. The roots of populism are found in the left, voicing the dreams and demands of exploited workers, the poor and the dispossessed. More recently, the populist tradition has been harnessed by the right, fuelled by the anti-Communist rhetoric of the Cold War, and the ascendancy of the Christian right. This development is traced through the presidential campaigns of George Wallace, to the forthright populism of Ronald Reagan.

"Michael Kazin enables us to begin to understand the way in which populism has changed from a politics of the left to a politics of the right. The important questions raised by the success of the populist right in the United States are illuminated in Kazin's splendid and timely book."--The Nation

"Kazin shows populism's canny ability to mix homespun rhetoric and political savvy. . . . The book explains something very important in American life with scrupulous fairness and a keen eye for the humanizing detail. It is as good a road map as we have to the politics of the people who work hard and play by the rules."--Wall Street Journal

"A perceptive and passionately liberal book. . . . Beginning with the antislavery crusade of the 1840s, Kazin skillfully surveys more than a century of mass protests, using imagery and symbolism as his guides."--New York Times

Michael Kazin is Professor of History at American University.

1. The Populist Persuasion: An American History

2. The Populist Persuasion: An American History

3. The Populist Persuasion: An American History