Items related to The Culture of Fear: Why Americans Are Afraid of the... 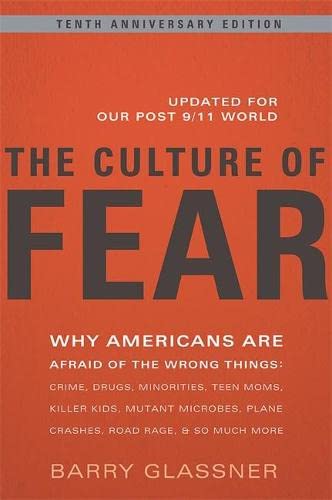 In the age of 9/11, the Iraq War, financial collapse, and Amber Alerts, our society is defined by fear. So it’s not surprising that three out of four Americans say they feel more fearful today then they did twenty years ago. But are we living in exceptionally dangerous times? In The Culture of Fear, sociologist Barry Glassner demonstrates that it is our perception of danger that has increased, not the actual level of risk. Glassner exposes the people and organizations that manipulate our perceptions and profit from our fears, including advocacy groups that raise money by exaggerating the prevalence of particular diseases and politicians who win elections by heightening concerns about crime, drug use, and terrorism. In this new edition of a classic book—more relevant now than when it was first published—Glassner exposes the price we pay for social panic.

"[The Culture of Fear] ought to be part of every savvy media-watcher's toolbox."--American Prospect

"[Glassner is] a master at the art of dissecting research."--New York Times

"We become what we behold. And what we behold in our public media is an America more terrifying than it actually is. Combining meticulous scholarship with a winning prose style, Barry Glassner shows how and why our media are scaring us to death. The book is a calming as it is serious, and offers a sound intellectual alternative to Prozac."--Neil Postman, author of Amusing Ourselves to Death

"The Culture of Fear uses strong data and careful reasoning to calm everybody down."--Amitai Etzioni, author of The Limits of Privacy

"One of the most important sociological books you'll read this year, and certainly the most reassuring."--Kirkus Reviews

"Glassner has written a gutsy exposé of one of the most widespread delusions of our time: misplaced fear."
--Los Angeles Times

Barry Glassner is professor of sociology at the University of Southern California. He is the author of seven books and countless articles that have appeared in magazines and newspapers around the world. His academic research has appeared in the most prestigious journals in sociology and psychiatry. He lives in Los Angeles.

6. THE CULTURE OF FEAR: WHY AMERICA