Items related to The Taming of the Shrew (Signet Books)

Shakespeare, William; Heilman, Robert B. The Taming of the Shrew (Signet Books)

The Taming of the Shrew (Signet Books) 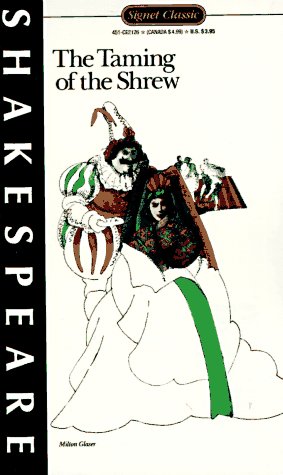 Unique features include an extensive overview of Shakespeare's life, world, and theater by the general editor of Signet Classic Shakespeare series, plus a special introduction to the play by the editor Sylvan Barnet, Tufts University. It also contains text, notes, and commentaries printed in the clearest most readable type. Special introduction by Robert B. Heilman, University of Washington.

One of the most controversial and problematic of all of Shakespeare's plays, The Taming of the Shrew is a typical Elizabethan domestic comedy written around 1592. Petruchio, a gentleman of Verona, arrives in Padua and announces to his friends that "I come to wive it wealthily in Padua; / If wealthily, then happily in Padua". He soon finds that a group of men keen to marry Bianca, the younger daughter of rich old Baptista, are frustrated by her elder, "shrewish" sister, Katherine. There is much subsequent hilarity as Bianca's suitors make a bet with Petruchio that he cannot "tame" and marry Katherine. Despite Katherine's protestations, Petruchio goes ahead with the match, using deliberately unorthodox behaviour to confuse Katherine (including a scene where he starves her), claiming that "this is the way to kill a wife with kindness". The play culminates with a scene of Katherine's apparently spontaneous subjection to her husband's will, where she places her hand beneath her husband's foot, and tells the other wives present that "thy husband is thy lord, thy life, thy keeper". The play's gratuitous scenes of women being abused and vilified in the name of "comedy" has made many directors and critics very uncomfortable with the play, and many feminist critics have condemned contemporary productions of the play as reproducing certain 16th-century stereotypes concerning women who speak out against male authority. --Jerry Brotton

'A triumphant addition to our times.' - Fiona Shaw, The Times

1. The Taming of the Shrew (Signet Classic, Shakespeare)