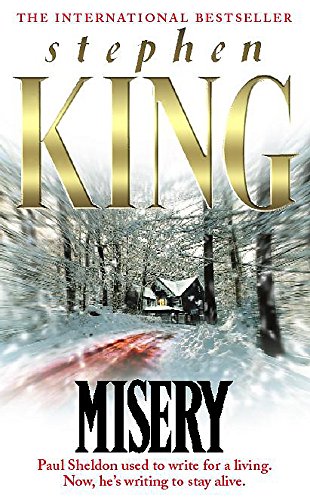 All our books are used but in good condition. All books checked carefully for damage before listing.EXCELLENT value for money and ready for dispatch using Amazons fufillment service.We believe you will be completely satisfied with our quick and reliable service. All orders are dispatched as swiftly as possible

In Misery, as in The Shining, a writer is trapped in an evil house during a Colorado winter. Each novel bristles with claustrophobia, stinging insects, and the threat of a lethal explosion. Each is about a writer faced with the dominating monster of his unpredictable muse.

Paul Sheldon, the hero of Misery, sees himself as a caged parrot who must return to Africa in order to be free. Thus, in the novel within a novel, the romance novel that his mad captor-nurse, Annie Wilkes, forces him to write, he goes to Africa--a mysterious continent that evokes for him the frightening, implacable solidity of a woman's (Annie's) body. The manuscript fragments he produces tell of a great Bee Goddess, an African queen reminiscent of H. Rider Haggard's She.

He hates her, he fears her, he wants to kill her; but all the same he needs her power. Annie Wilkes literally breathes life into him.

Misery touches on several large themes: the state of possession by an evil being, the idea that art is an act in which the artist willingly becomes captive, the tortured condition of being a writer, and the fears attendant to becoming a "brand-name" best selling author with legions of zealous fans. And yet it's a tight, highly resonant echo chamber of a book--one of King's shortest, and best novels ever. --Fiona Webster

As a storyteller, he is up there in the Dickens class (The Times)

Stephen King is one of those natural storytellers...getting hooked is easy (Frances Fyfield, Express)