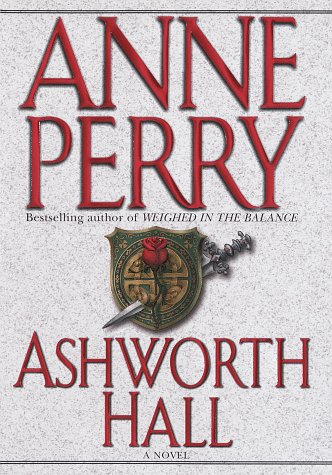 Scotland Yard's Superintendent Thomas Pitt and his clever spouse, Charlotte, return in their seventeenth outing as they investigate a murder at a secret summit of Irish political figures that threatens to precipitate a civil war. Tour.

Long-time readers of Anne Perry will be familiar with Inspector Thomas Pitt, the low-born London copper and his better-bred wife, Charlotte. Set during the Victorian era, Perry's mysteries usually examine the dark underbelly of aristocratic life. Homosexuality, adultery, and paedophilia have all been subjects of her previous books; in Ashworth Hall she injects a new ingredient--politics. Ashworth Hall is the name of an estate where, in the autumn of 1890, a highly secretive meeting is being held to discuss Anglo-Irish relations. The "Irish Problem" soon takes a backseat to murder, however, and Inspector Pitt, who as the son of servants grew up on just such an estate, is called in to solve the case. While he investigates below-stairs, Charlotte gathers clues above. As usual, their collaboration is successful, both in terms of solving the crime and as literature.

‘Her latest story is especially fascinating. An intriguing read’
Booklist

Book Description Hardcover. Condition: New. Dust Jacket Condition: New. 1st Edition. FIRST EDITION/FIRST PRINTING with a complete number line beginning in 1. HAND SIGNED ON THE TITLE PAGE BY ANNE PERRY. Fine in a Fine Dust Jacket. THE BOOK IS IN AS NEW & UNREAD CONDITION - tight, crisp and square, no bumping. Not remainder marked or price-clipped. PRISTINE COPY OF THIS BOOK. PHOTOS OF THE ACTUAL BOOK SENT UPON REQUEST. ALL BOOKS SHIPPED IN BOXES WELL PROTECTED. THIS BOOK IS OFFERED HERE AT AN INTRODUCTORY PRICE FOR OUR RE-GRAND OPENING, IN SEPT ALL BOOK PRICES WILL BE ADJUSTED TO REFLECT THE COLLECTIBLE MARKET VALUE. ALL BOOKS HAVE BEEN BOXED IN CLIMATE CONTROLLED STORAGE AND HAVE NOT BEEN TOUCHED BY ANY OTHER HUMAN THAN ME FOR AT LEAST THE LAST 10 YEARS - ALL BOOKS ARE SEALED AND BUBBLE WRAPPED AND SHIPPED IN BOXES - YOU CAN BUY HERE WITH CONFIDENCE KNOWING THAT A BUNCH OF STRANGERS HAVE NOT HANDLED YOUR BOOK -. Signed by Author(s). Seller Inventory # 000578