Items related to Where Eagles Dare 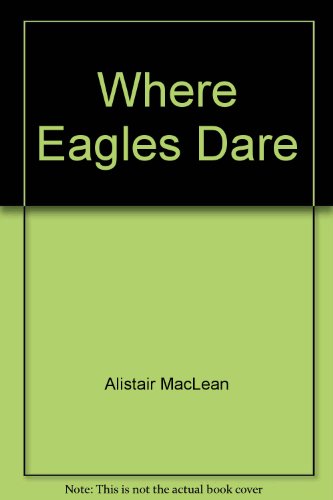 One winter night seven men and a girl, are parachuted onto a mountainside in war-time Germany. Their objective is to rescue a crashed VIP American general who has been taken to an in accessible castle for interrogation.

‘There is a splendid audacity about Where Eagles Dare, in which a handful of British agents invade an “impenetrable” Gestapo command post ... MacLean offers a real dazzler of a thriller, with vivid action, fine set pieces of suspense and a virtuoso display of startling plot twists.’
New York Times

Alistair MacLean, the son of a minister, was brought up in the Scottish Highlands. In 1941 he joined the Royal Navy. After the war he read English at Glasgow University and became a teacher. Two and a half years spent aboard a wartime cruiser gave him the background for HMS Ulysses, his remarkably successful first novel, published in 1955. He is now recognized as one of the outstanding popular writers of the 20th century, the author of 29 worldwide bestsellers, many of which have been filmed.

Book Description Mass Market Paperback. Condition: GOOD. Spine creases, wear to binding and pages from reading. May contain limited notes, underlining or highlighting that does affect the text. Possible ex library copy, will have the markings and stickers associated from the library. Accessories such as CD, codes, toys, may not be included. Seller Inventory # 3450154237

Book Description Mass Market Paperback. Condition: Good. Item is in good condition. Some moderate creases and wear. This item may not come with CDs or additional parts including access codes for textbooks. Might be an ex-library copy and contain writing/highlighting. Photos are stock pictures and not of the actual item. Seller Inventory # DS-0449205282-3