Items related to Lord of the Far Island 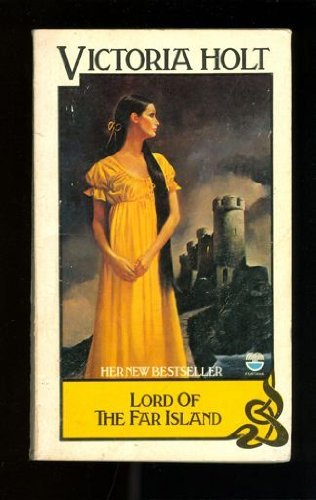 The past is never far behind....

Ellen Kellaway, orphaned at age five, was raised by wealthy cousins, but was never allowed to forget that her every advantage was owed to the charity of others. However, when the son of a powerful London family asks for her hand in marriage, her world is opened up to untold wealth and social position. She never imagined that such an unlikely dream would come true.

Despite these wonderful new developments in her life, Ellen continues to be wracked b the bad dreams that have haunted her since childhood. What is the meaning of the lifelong nightmare--the image of an unfamiliar room, a door opening and behind it a dreadful presence? Perhaps it is a message urging her to uncover the secrets of her long-lost family--the secrets of the ancient home of the Kellaways on the Far Island, off the wild coast of Cornwall.

"The prolific Miss Holt combines suspense and romance with the master's touch".

Lovely Ellen Kellaway knew very little about her past. Orphaned as a child and taken in by her arrogant cousin as a "poor relation", she was grateful when the handsome young son of a wealthy family asked for her hand. But mysteriously, the marriage never took place.

Ellen was unexpectedly rescued from a bleak future by a summons from her newly discovered guardian, Jago Kellaway, Lord of the Far Island, off the wild coast of Cornwall.

On that special island of the Kellaways, Ellen was drawn deeper and deeper into the secrets of a past as alive and threatening as the present. There the enigmatic Jago Kellaway offered her the fabled Island Necklace worn by the mistresses of Kellaway Castle. Was it a promise of happiness -- or a dark symbol of death...?