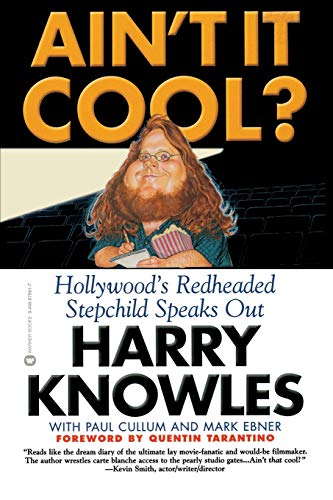 * Ain't it Cool? was published in Warner hardcover (0-446-52597-9) in 3/02. The foreword is written by Quentin Tarantino. * Knowles' Web site gets over 1,200 emails and 1.5 million hits daily. Quentin Tarantino, Ron Howard, and Bruce Willis are among his many celebrity fans. * Harry has appeared on Roger Ebert & the Movies and Politically Incorrect, and has been profiled in The New York Times, Los Angeles Times, The Wall Street Journal, Vanity Fair, Newsweek, Time(R), Parade, US, and Entertainment Weekly. He was featured in Earthlink's $15 million ad campaign. * Internet site books have become instant New York Times bestsellers, including Matt Drudge's Drudge Manifesto (New American Library, 2000) and The Onion's Our Dumb Century (Three Rivers Press, 1999). * Also available as a Time Warner AudioBook(R).

"Reads like the dream diary of the ultimate lay movie-fanatic and would-be filmmaker."

Book Description Paperback. Condition: New. Reprint. Language: English. Brand new Book. Harry Knowles, a college dropout who grew up on films, started the Ain't It Cool Web site from his bedroom in Austin, TX, and in four short years has become one of the most powerful and feared men in show business. With his legion of "spies", Harry has crashed the insider world of Hollywood, uncovering guarded secrets about scripts, casting, production, test screenings, and the release of films, before anyone else. In Ain't It Cool?, Harry uses his own story as a launching pad for his life-long obsession with films and how they're made -- the good, the bad, and the ugly. Ain't It Cool? is the story of the ultimate movie geek getting a place at Hollywood's most exclusive table. It's for anyone who loves movies and the entertainment industry. Seller Inventory # AAV9780446679916