Items related to The Rich Dad's Guide to Investing: What the Rich...

Kiyosaki, Robert T. The Rich Dad's Guide to Investing: What the Rich Invest in That the Poor Do Not!

The Rich Dad's Guide to Investing: What the Rich Invest in That the Poor Do Not! 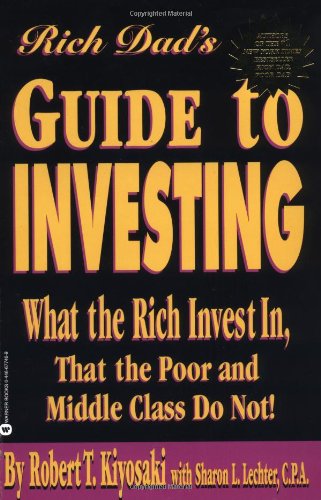 Personal finance author and lecturer Robert T. Kiyosaki developed his unique economic perspective from two very different influences - two fathers. One father (Robert's real father) was a highly educated man but fiscally poor. The other was the father of Robert's best friend - that dad was a college drop-out who became a self-made multi-millionaire. In this follow-up to the bestselling "Rich Dad, Poor Dad", he reveals the secret of how the wealthiest people become wealthier by presenting some simple investing secrets and explaining how anyone can enjoy cash benefits merely by knowing where and how best to invest their money. The author's nuts-and-bolts approach to personal finance and understanding the real earning power of money has gained him a huge following, particularly as he knows all he describes from first-hand experience. Once so cash poor that he and his wife were forced to sleep in their car, today the Kiyosakis are multi-millionaires and highly sophisticated and experienced investment experts.

The rich are different from the rest of us. That's why 90 percent of all corporate shares are owned by 10 percent of the people. Kiyosaki believes it's possible for anyone to move up into that 10 percent, but it takes a different view of investing than most people have: it takes a plan to be a successful investor. And a plan is more than simply buying and selling, or collecting "assets" that bring in no cash and are thus more akin to liabilities. The way most people invest, "they might as well be pushing a wheelbarrow in a circle," he writes. A plan is "mechanical, automatic, and boring," a formula for success that has worked historically for most of those who've used it. Kiyosaki's "rich dad" (actually, the father of his best friend) tells him the simplest analogy is the game Monopoly: buy four green houses, trade them for one red hotel, and repeat until you become rich.

The overall message of Rich Dad's Guide to Investing is that this is an abundant world, full of opportunity for the sophisticated investor. However, it sometimes takes a while to find this point. Much of the book is told in dialogues between young Kiyosaki and his rich dad, and these conversations can ramble. There are rewards for the careful reader--for example, in the middle of a section on the basic rules of investing, Kiyosaki's rich dad compares investor education to toilet training: difficult at first but eventually automatic. But getting to these inspired metaphors means wading through a lot of repetitive dialogue. It's a bit ironic that someone who advocates investor discipline should show so little as a writer. But by the end of the book, even the rambling starts to make sense. By the hundredth time you read that the rich don't work for money and that you don't need money to make money, both concepts start to make sense. It still looks difficult to apply these ideas, but Rich Dad's Guide to Investing certainly makes the case that they'll work for anyone bold and smart enough to practice them. --Lou Schuler, Amazon.com

'RICH DAD, POOR DAD is a starting point for anyone looking to gain control of their financial future' -- USA Today

'Robert Kiyosaki's work in education is powerful, profound, and life changing. I salute his efforts and recommend him highly' -- Anthony Robbins

1. Rich Dad's Guide to Investing: What the Rich Invest in, That the Poor and the Middle Class Do Not!

2. Rich Dad's Guide to Investing: What the Rich Invest in, That the Poor and Middle Class Do Not!

3. Rich Dad's Guide to Investing: What the Rich Invest in, That the Poor and Middle Class Do Not!