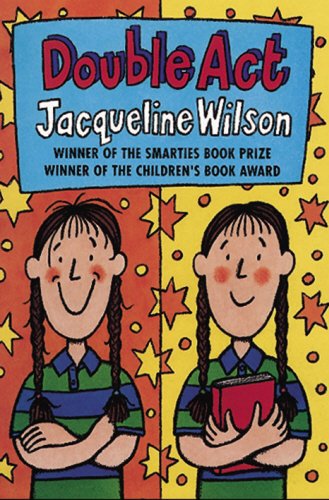 Overall winner of the Smarties Book Prize 1995. Ruby and Garnet are twins. Since their mother died they have lived with Dad and Gran, but now nasty Rose is moving in, and they must deal with their new home and new mother, who turns out not to be so nasty after all.

Identical twins Ruby and Garnet are inseparable. They do everything together, and go every where together. They love being twins, and since the death of their mother they have been closer than ever, safe in their little world. But when Dad finds a new girlfriend everything in the twins' lives is turned upside down--new home, new school, new everything. And gradually, being twins isn't quite the same anymore.

In Double Act, Jacqueline Wilson brilliantly captures the pain and uncertainty that change can sometimes bring with it. This story of two little girls gradually realising that they have no real control over what is happening is both funny and poignant, but it is as the twins begin to accept that things will never be quite the same that Wilson shines, allowing her characters to grow and develop as individuals without ever losing sight of the bond that holds them together. --Susan Harrison

'Hilarious tale which contains dark notes that ring very true' The Times; 'A brilliant young writer of wit and subtlety' The Times. 'She's so good, it's exhilarating' Philip Pullman, Guardian. 'She should be prescribed for all cases of reading reluctance' Independent On Sunday.