Items related to The Rights Of Desire

Brink, Andre The Rights Of Desire 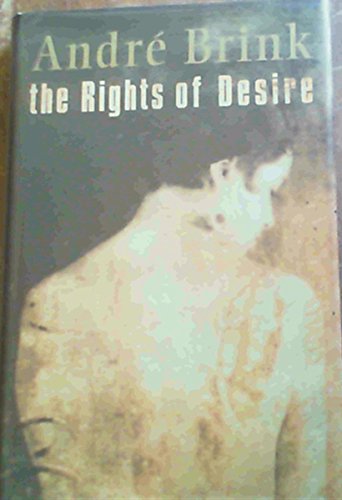 Ruben Oliver's life is coming adrift from its moorings. He has been obliged to take early retirement from his job as a librarian due to 'rationalisation' and the new political realities of South Africa. His wife has died. One of his sons has settled in Australia, the other is about to emigrate to Canada while trying to persuade Ruben that it is too dangerous to remain. His best friend and neighbour, Johnny MacFarlane, has been brutally murdered. The only constants are his old family home in the suburbs of Cape Town, haunted by the ghost of a young slave woman; and his housekeeper, Magrieta, with whom he has a shared history that goes back more than half his life. Tessa Butler comes out of the rain one night in response to an advertisement for a lodger. Ruben is captivated by this beautiful young stranger. She restores passion to his life, but brings with her a turbulent past and a complex love life as well as demons from the world outside his home. Through her he gains a troubling view of female sexuality - its ghosts and bones and brazenness. The Rights of Desire is a meditation on ageing and on love, on loneliness and fulfilment, on guilt and innoce

Andre Brink's The Rights of Desire concerns a retired librarian's infatuation with his young lodger. Ruben Olivier, as the ageing lecher, is resolutely unsympathetic. He pathetically spends weeks sifting through the dust in his basement because the beloved's navel ring has fallen through a crack in the floorboards. When Tessa, the lodger brings home a black man, Zolani, he nearly has a heart attack, musing after he has recovered his breath: "It was unworthy and I knew it. Yet how could I not wonder about it?--Zolani is welcomed into her bed but I am still denied ... her exasperating and prodigal beauty, distributed like alms among the poor. Only I remained denied." His relationship to literature and music is similarly self-aggrandizing and precious: "I went to Spain with Don Quixote--I still go every year in the summer--and to St Petersburg with Dostoevsky every winter. In between, I go to Paris with Balzac, or with Zola if I feel up to it." It is as difficult to like Tessa, who, in addition to being a little bit slutty and nutty is also a compulsive liar.

Cluttered around their doomed but mutually sustaining love affair is the atrocious exhibition of the white post-apartheid narration of the suburbs. Olivier's best friend is brutally murdered and failing to recognise the crumpled pile of rags on the side of the road Olivier drives by. Tessa narrowly escapes being gang raped in the Newlands forest. The novel equivocates between claiming that all this sex and violence is a function of contemporary social collapse or may simply be an expression of the timeless beauty and violence of Cape Town. Woven into the story of Ruben and Tessa is the story of Antje of Bengal, a 17th-century slave girl, whose ghost haunts the house and the story of Magrieta, Olivier's housekeeper, who is forced to flee her home after an episode of township violence. At times over-ripe, this novel is at it most compelling in its characterisation of this pair. --Neville Hoad

"Peter Carey, Garcia Marquez, Solzhenitsyn: Andre Brink must be considered with that class of writer." - "Guardian""

Book Description Hardback. Condition: Very Good. The book has been read, but is in excellent condition. Pages are intact and not marred by notes or highlighting. The spine remains undamaged. Seller Inventory # GOR004060089

Book Description Condition: Good. Ships from the UK. Former library book; may include library markings. Used book that is in clean, average condition without any missing pages. Seller Inventory # 40106433-20

The Rights of Desire; A Novel

The Rights Of Desire, a novel