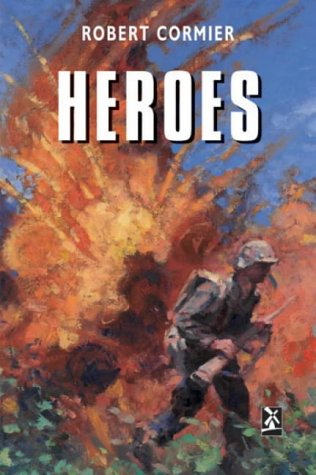 Francis is a World War II hero - or so everyone believes. Only Francis knows that the act of "heroism" that destroyed his face was a suicide attempt. Francis has one purpose in his life - to kill Larry La salle, the charismatic youth leader who raped Francis' girlfriend years before.

Eighteen-year-old Francis Cassavant has returned from world war two an unwilling hero. Although he can still see and hear, a grenade has blown away his nose, his ears, his teeth and his cheeks, effectively leaving him faceless. Hiding his ghastly wounds with bandages and a white silk scarf, Francis welcomes the anonymity his mutilation brings him, for he has returned to his hometown with a secret mission--a plot for revenge (against his enemy Larry LaSalle) that he values more than his own life. Francis's eerily matter-of-fact acceptance of his hideous mien, along with his sweetness and selflessness, contrast sharply with his obsessive need for vengeance. No one recognizes him as the quiet kid who once loved Nicole Renard and hung out with fellow teens at the Wreck Centre. LaSalle, formerly a charismatic youth leader, has also come back from the war a hero, and only Francis knows the dark side of this older man's concern for young people. But does LaSalle's one evil act outweigh all the good he has done? And is Francis just as guilty because he could have prevented it and didn't?

Robert Cormier--winner of the Margaret A. Edwards Award and many other honours--has once again crafted a riveting yarn of psychological suspense. Francis's story is revealed only gradually in hints that keep the reader guessing. Young teens will find it a quick and absorbing read, and older adolescents (and full-fledged adults, too) will relish pondering the many-sided ethical questions Cormier raises about heroism, guilt and forgiveness. (Ages 13 to 16)

Book Description Heinemann, 2001. Hardcover. Condition: Good. Ex library copy with usual stamps/stickers Good condition is defined as: a copy that has been read but remains in clean condition. All of the pages are intact and the cover is intact and the spine may show signs of wear. The book may have minor markings which are not specifically mentioned. Most items will be dispatched the same or the next working day. Seller Inventory # wbb0014194657

Book Description Hardback. Condition: Very Good. The book has been read, but is in excellent condition. Pages are intact and not marred by notes or highlighting. The spine remains undamaged. Seller Inventory # GOR001072035