Items related to A Wizard Of Earthsea (New Windmills)

A Wizard Of Earthsea (New Windmills) 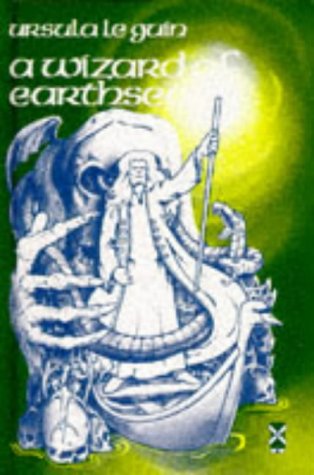 One of a series of top-quality fiction for schools, this is an American fantasy adventure in which an apprentice wizard travels the Archipelago, first to learn his trade, then to conquer an evil hape which impetuous practising has brought from limbo.

Often compared to Tolkien's Middle-Earth or Lewis's Narnia, Ursula K. Le Guin's Earthsea is a stunning fantasy world that grabs quickly at our hearts, pulling us deeply into its imaginary realms. Four books (A Wizard of Earthsea, The Tombs of Atuan, The Farthest Shore and Tehanu) tell the whole Earthsea cycle--a tale about a reckless, awkward boy named Sparrowhawk who becomes a wizard's apprentice after the wizard reveals Sparrowhawk's true name. The boy comes to realize that his fate may be far more important than he ever dreamed possible. Le Guin challenges her readers to think about the power of language, how in the act of naming the world around us we actually create that world. Teens, especially, will be inspired by the way Le Guin allows her characters to evolve and grow into their own powers.

In this first book, A Wizard of Earthsea readers will witness Sparrowhawk's moving rite of passage--when he discovers his true name and becomes a young man. Great challenges await Sparrowhawk, including an almost deadly battle with a sinister creature, a monster that may be his own shadow.

"The magic of Earthsea is primal; the lessons of Earthsea remain as potent, as wise, and as necessary as anyone could dream."--Neil Gaiman, author of The Sandman
"New and longtime Earthsea fans will be drawn to these impressive new editions."--Horn Book

1. A Wizard Of Earthsea (New Windmills)

Book Description Hardback. Condition: Very Good. The book has been read, but is in excellent condition. Pages are intact and not marred by notes or highlighting. The spine remains undamaged. Seller Inventory # GOR002978553

2. A Wizard Of Earthsea (New Windmills)

Book Description Hardback. Condition: Good. The book has been read but remains in clean condition. All pages are intact and the cover is intact. Some minor wear to the spine. Seller Inventory # GOR001867110

4. A Wizard Of Earthsea (New Windmills)

5. A Wizard Of Earthsea (New Windmills)

Book Description Heinemann, 1973. Condition: Good. Bumps/wear at edges and corners of hard board. Some storage scratches and minor fading to hard board. Text as new and unread. Book. Seller Inventory # 043927-14

6. A Wizard of Earthsea