Items related to The Spice of Life 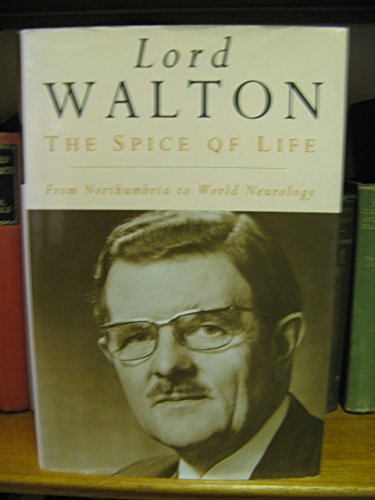 This detailed autobiography recounts the life of Lord Walton of Detchant, a man who has held high office in almost all areas of the medical profession. Early years in Durham county paint a picture of a Britain which might now only exist in the most isolated or rural areas, and contrasts markedly with later stories of international travel. Nevertheless, those early days in the North of England and subsequent years at the University of Newcastle-upon-Tyne were happy, and Lord Walton took his title from Detchant in Northumberland where he now has a home. Military service and later service in the Territorial Army provide some entertaining tales, and throughout the book, the stories of cricket are evidence of a love for the game, although in more recent years golf has become an abiding interest. The chapters dealing with responsibilities in the British Medical Association, the Royal Society of Medicine, the General Medical Council and the World Federation of Neurology provide an insight into the workings of the medical profession, particularly in the United Kingdom, and the problems involved in running an Oxford college are covered in his account of the years he spent as Warden of Green College.

Book Description Hardback. Condition: Very Good. The book has been read, but is in excellent condition. Pages are intact and not marred by notes or highlighting. The spine remains undamaged. Seller Inventory # GOR003782620

Book Description Condition: Very Good. Ships from the UK. Former library book; may include library markings. Used book that is in excellent condition. May show signs of wear or have minor defects. Seller Inventory # 40630848-20

Book Description Condition: Good. This is an ex-library book and may have the usual library/used-book markings inside.This book has hardback covers. In good all round condition. Dust jacket in good condition. Please note the Image in this listing is a stock photo and may not match the covers of the actual item,1100grams, ISBN:9780434841561. Seller Inventory # 9173517