Steinbeck, John Five Best Sellers: "Grapes of Wrath", "Moon is Down", "Cannery Row", "East of Eden" and "Of Mice and Men" 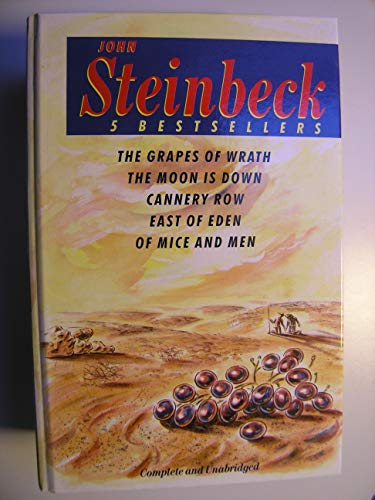 'I've done my damndest to rip a reader's nerves to rags, I don't want him satisfied.'

Shocking and controversial when it was first published, The Grapes of Wrath is Steinbeck's Pultizer Prize-winning epic of the Joad family, forced to travel west from Dust Bowl era Oklahoma in search of the promised land of California. Their story is one of false hopes, thwarted desires and powerlessness, yet out of their struggle Steinbeck created a drama that is both intensely human and majestic in its scale and moral vision.

A novelist who is also a true poet (Sunday Times)

A BBC Radio 4 full-cast dramatisation of John Steinbeck's Pulitzer Prize winning novel, about economic migration and the endurance of the human spirit.

Book Description Hardcover. Condition: Used; Very Good. Dispatched, from the UK, within 48 hours of ordering. Though second-hand, the book is still in very good shape. Minimal signs of usage may include very minor creasing on the cover or on the spine. Aged book. Tanned pages and age spots, however, this will not interfere with reading. Ripped/damaged jacket. The dust jacket of this book is slightly damaged/ripped, however, this does not affect the internal condition. Seller Inventory # CHL7024605

Book Description Hardback. Condition: Good. The book has been read but remains in clean condition. All pages are intact and the cover is intact. Some minor wear to the spine. Seller Inventory # GOR001276475

Book Description Hardback. Condition: Very Good. The book has been read, but is in excellent condition. Pages are intact and not marred by notes or highlighting. The spine remains undamaged. Seller Inventory # GOR001043748

Book Description Hardback. Condition: Fair. A readable copy of the book which may include some defects such as highlighting and notes. Cover and pages may be creased and show discolouration. Seller Inventory # GOR001753810

Book Description Hardcover. Condition: Used; Good. **SHIPPED FROM UK** We believe you will be completely satisfied with our quick and reliable service. All orders are dispatched as swiftly as possible! Buy with confidence!. Seller Inventory # mon0000634380

Five Best Sellers: "Grapes of Wrath", "Moon is Down", "Cannery Row", "East of Eden" and "Of Mice and Men

Five Best Sellers: "Grapes of Wrath", "Moon is Down", "Cannery Row", "East of Eden" and "Of Mice and Men" Steinbeck, John