Items related to Evolution: The Triumph of an Idea

Zimmer, Carl Evolution: The Triumph of an Idea

Evolution: The Triumph of an Idea 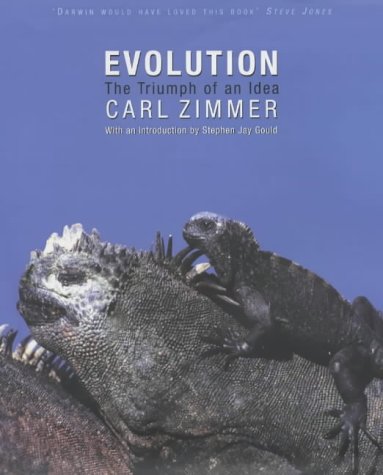 The theory of evolution stands over modern biology as quantum mechanics and relativity do over modern physics. And few modern scientists are as widely familiar and celebrated as Darwin. Yet most of us remain less than entirely clear as to how evolution by natural selection works and a series of celebrated titles by such writers as Steven Jay Gould and Richard Dawkins do little to help, being each so partisan of a particular, contentious, view of the subject. Carl Zimmer draws together the entire history of the subject, from Darwin's original insights on the voyage of the Beagle, through the 'modern synthesis', which combined genetics with natural selection, to the Darwinian medicine and the 'selfish gene' debates of today. There is no comparably balanced and wide-ranging book available at present, let alone one that is as well and accessibly written. For all of us who lack a comfortable familiarity with this most influential of scientific ideas, an idea that has as many implications for our understanding of child-rearing, AIDS and the fate of the rain-forest as it does for the 'origin of species', this is an ideal introduction.

While there are countless books on evolution, there are few that have quite the combination of interest for the general reader provided by American science writer Carl Zimmer's Evolution. From the historical genesis of Darwin's idea, born and bred aboard the Beagle and the subsequent furore after its publication in 1859, Zimmer brings us right up to date with an overview of the status of the Darwin/Wallace theory today. Darwin promised his readers "a grandeur in this view of life" and, as Zimmer very ably shows, life now displays far more grandeur than even Darwin appreciated. Zimmer is ideally qualified to do this as he was a senior editor at Discover magazine where he saw much of the new science developing before his eyes. He is also a well-known author of some very successful popular science books such as At the Water's Edge and more recently Parasite Rex. The bare factual bones of the science are deftly interlaced with stories of the individual scientists and their discoveries which normally are hidden from view. Zimmer takes us expertly from the origin of life and its prehistoric evolution as evidenced by fossils, through the genetic evidence and evolution of sex to the question of primate evolution and the problems this still raises for religious fundamentalists. Beautifully illustrated with photos, diagrams and artwork, and supported with an extensive further reading list and index, Evolution is part of a bigger WGBH television and educational project but can stand alone on its own considerable merits. --Douglas Palmer

'Written with crystal clarity, Zimmer uses a broad brush to sweep us through the length and breadth of evolution.' -- Tim Birkhead BBC Wildlife Magazine

Darwin would have loved it: and anyone who wants to know why life is the way it is need look no further.’ -- Steve Jones

The evolution of life over four billion years is a grand narrative, full of plots, intrigues, surprises and deaths.’ -- Matt Ridley

‘Do we need more books about Darwin? Yes, we do, but only if they are as good as Zimmer's Evolution.' -- New Scientist

‘This brilliant book is a virtual Voyage of the Beagle! Carl Zimmer shows how right Darwin was...' -- Steve Jones

1. Evolution: The Triumph of an Idea