Items related to Undead and Unforgiven: A Queen Betsy Novel: 14 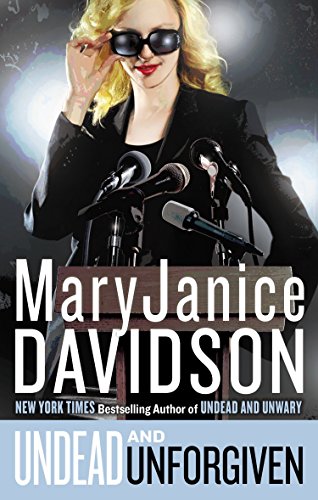 New York Times bestselling author MaryJanice Davidson is back. So is Betsy Taylor, "everyone's favorite vampire queen" (Bitten by Books) and this time Betsy's going viral... If Betsy Taylor has learned anything about ruling Hell it's: 1) She can't do it alone, and 2) She doesn't have to. She's got the help of a devoted vampire king, a dateless zombie, an exhausted new mom, an unshowered cop, a bitchy ghost, a kindly dead priest, and her late stepmother ("Go Team Satan 2.0!"). But the latest major hurdle in her afterlife is so big she can't even see it until it's on YouTube. Betsy's father and half sister Laura (a former Antichrist with a grudge) have teamed up, for what sinister purpose Betsy can't imagine. The former Antichrist didn't take kindly to getting what she wished for, and has decided that's entirely the fault of the vampire queen. What that means for Betsy is trouble (more than usual, even) and possible exposure to an unsuspecting world. Meanwhile Hell is having a deleterious effect on Betsy's friends ("I didn't think it was possible, but the damned are getting meaner."), the newly dead are confused about Hell's new rules ("A buddy system? Really?"), and the vampire king is trying to poach on Betsy's territory. Betsy loves her husband, but that's not the same as trusting him. Before long the king and queen of the vampires aren't speaking to each other, the mansion on Summit Avenue is a war zone, and Betsy's getting calls from a werewolf, a mermaid, and worst of all, her mother ("What do you mean you can't babysit?"). No one said life after death would be easy, but c'mon: this is ridiculous.

"BE PREPARED TO FALL IN LOVE WITH THE UNDEAD ALL OVER AGAIN!"
--Romance Reviews Today