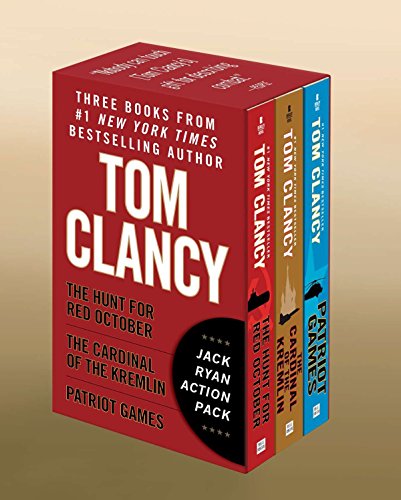 This deluxe box set includes:
THE HUNT FOR RED OCTOBER - PATRIOT GAMES - THE CARDINAL OF THE KREMLIN

"He constantly taps the current world situation for its imminent dangers and spins them into an engrossing tale."--The New York Times Book Review "A brilliant describer of events."--The Washington Post "No one can equal his talent for making military electronics and engineering intelligible and exciting...He remains the best!"--Houston Chronicle About the Author:

Thirty years ago Tom Clancy was a Maryland insurance broker with a passion for naval history. Years before, he had been an English major at Baltimore's Loyola College and had always dreamed of writing a novel. His first effort, The Hunt for Red October, sold briskly as a result of rave reviews, then catapulted onto the New York Times bestseller list after President Reagan pronounced it "the perfect yarn." From that day forward, Clancy established himself as an undisputed master at blending exceptional realism and authenticity, intricate plotting, and razor-sharp suspense. He passed away in October 2013.