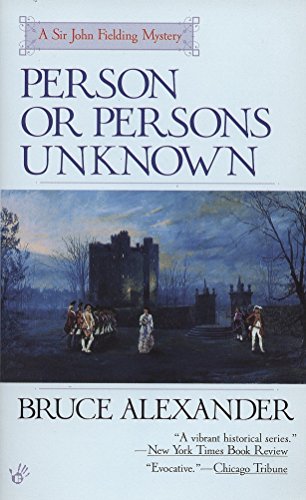 John Fielding was famous not only as cofounder of London's first police force, the Bow Street Runners, but also as a magistrate of keen intellect, fairness and uncommon detective ability. When a crime was committed, he often took it upon himself to solve it. What made this all the more remarkable was that he was blind. Now the blind magistrate and his young assistant and ward, Jeremy Proctor, face a series of crimes that hit shockingly close to home. Prostitutes are being murdered around Covent Garden, and there are troubling implications about the identity of the killer. Baffled and frustrated, Fielding devises a daring and desperate plan, but the consequences are unexpected - and more terrible even than he could imagine.

Bruce Alexander is the pseudonym for a well-known author of fiction and nonfiction. The books in his series include Blind Justice; Murder in Grub Street (named by the New York Times Book Review as a notable book in 1995); Watery Grave; Person or Persons Unknown (named by the Chicago Tribune as one of the best novels of 1997); Jack, Knave and Fool; and Death of a Colonial.