Items related to Day of the Cheetah

Brown, Dale Day of the Cheetah

Day of the Cheetah 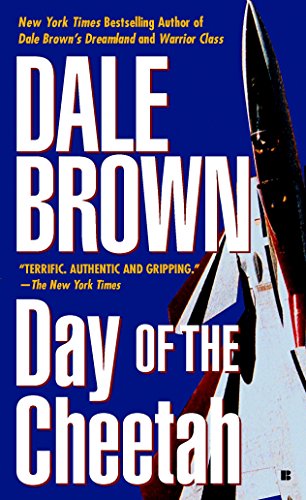 When a KGB mole hijacks DreamStar--a top-secret Navy fighter plane employing artificial intelligence in its cockpit--Major Patrick McLanahan is given the assignment to retrieve the precious machine. Reissue.

Once perfected, the aircraft nicknamed 'DreamStar' will be America's new air-superiority fighter and the world's deadliest combat-ready weapon. Even the advanced 'Cheetah', a heavily modified two-seater F-15E, is beginning to show its age – relegated to being the older, less 'intelligent' cousin of DreamStar.

But, unknown to the Cheetah’s pilot, Lieutenant Colonel Pat McLanahan – former navigator of the B-52 'Old Dog' a KGB mole has infiltrated the DreamStar project. When the mole hijacks the superplane, it is up to McLanahan to get the fighter back – despite the overwhelming odds stacked against him.

With its thrilling dog-fights, nail-biting suspense and convincing characters, 'Day of the Cheetah ' is the ultimate novel of high-tech aviation. It rockets to a breathtaking and shattering finale.

'Quite a ride... the flying sequences are terrific. Authentic and gripping... he knows everything about advanced fighter aircraft'
NEW YORK TIMES BOOK REVIEW

Former U.S. Air Force captain Dale Brown is the bestselling author of numerous action-adventure “techno-thriller” novels, including those in the Patrick McLanahan series and the Brad McLanahan series. He is the co-author—with Jim DeFelice—of the bestselling Dreamland techno-thriller series and the Puppet Master series. He is also a technical consultant on the Act of War PC real-time strategy game published by Atari Interactive, and the Megafortress PC flight simulator by Three-Sixty Pacific. His novels have been published in 11 languages and distributed to over 70 countries.

1. Day of the Cheetah

Book Description Berkley, 1990. Condition: New. The Soviets have stolen DreamStar America's most advanced fighter plane. Major Patrick McLanahan must get it back. His plane, the Cheetah, is the only chance against the mastery of the DreamStar. The greatest high-tech chase of all time is about to take off. Seller Inventory # 9780425120439

6. DAY OF THE CHEETAH (PATRICK MCLA