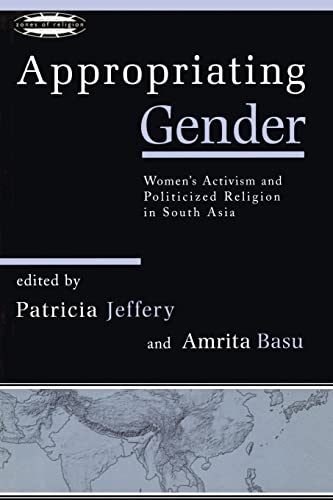 The first work to focus on women's agency and activism within the South Asian context, Appropriating Gender is an outstanding contribution to the field of gender studies.

This volume makes a very significant contribution to a growing literature on women, gender, and right wing politics in South Asia.

Appropriating Gender is a comprehensive collection of essays that examines the roles of women in fundamentalist movements, as well as the gender policies of these movements and of the South Asian states in which they operate. Divided into three sections, Part I examines gender, nation, and the state; Part II the "Everyday and the Local"; and Part III the dynamics of agency and activism in India, Sri Lanka and Bangladesh. Appropriating Gender is the first work to address fundamentalism from a woman's perspective, and is sure to become a classic in the fast-growing field of gender studies.

Book Description Paperback. Condition: New. Language: English. Brand new Book. Appropriating Gender explores the paradoxical relationship of women to religious politics in India, Pakistan, Sri Lanka, and Bangladesh. Contrary to the hopes of feminists, many women have responded to religious nationalist appeals; contrary to the hopes of religious nationalists, they have also asserted their gender, class, caste, and religious identities; contrary to the hopes of nation states, they have often challenged state policies and practices. Through a comparative South Asia perspective, Appropriating Gender explores the varied meanings and expressions of gender identity through time, by location, and according to political context. The first work to focus on women's agency and activism within the South Asian context, Appropriating Gender is an outstanding contribution to the field of gender studies. Seller Inventory # AAV9780415918664