Items related to Acts of Literature 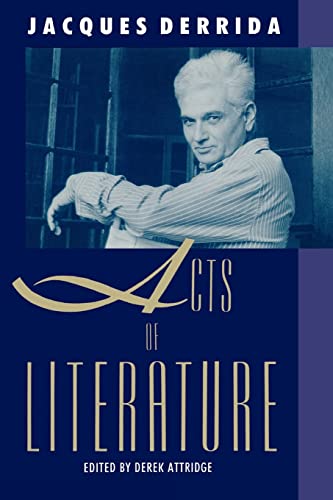 First published in 1992. Routledge is an imprint of Taylor & Francis, an informa company.

Acts of Literature, compiled in close association with Jacques Derrida, brings together for the first time a number of Derrida's writings on literary texts. The essays discuss literary figures such as Rousseau, Mallarme, Joyce, Shakespeare, and Kafka, and comprise pieces spanning Derrida's career. The collection includes a substantial new interview with him on questions of literature, deconstruction, politics, feminism and history, and Derek Attridge provides an introductory essay on deconstruction and the question of literature, with suggestions for further reading. These essays examine the place and operation of literature in Western culture, and are highly original responses to individual literary texts. They highlight Derrida's interest in literature as a significant cultural institution and as a peculiarly challenging form of writing, with inescapable consequences for our thinking about philosophy, politics and ethics.