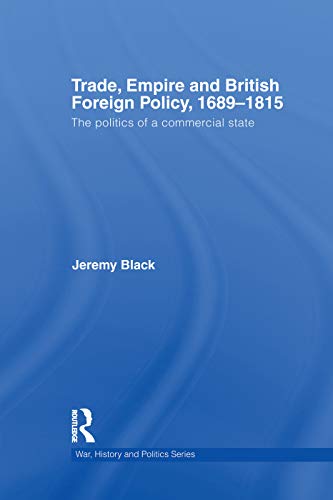 This new volume examines the influence of trade and empire from 1689 to 1815, a crucial period for British foreign policy and state-building.

Jeremy Black, a leading expert on British foreign policy, draws on the wide range of archival material, as well as other sources, in order to ask how far, and through what processes and to what ends, foreign policy served commercial and imperial goals during this period. The book is particularly interested in the conceptualization of these goals in terms of international competition, and how the contours and contents of this conceptualization altered during this period. Trade, Empire and British Foreign Policy, 1689-1815 also analyzes how the relationships between trade, empire and foreign policy were perceived abroad and how this contributed to an analysis of Britain as a distinctive state, and with what consequences.

This book will be of much interest to students of British imperial history, diplomatic history and international history in general.

Jeremy Black is a professor of history at the University of Exeter in the United Kingdom. He is, or has been, on numerous editorial boards, including the "Journal of Military History, the Journal of the Royal United Services Institute, Media History", and "History Today", and was editor of "Archives". He is the author or editor of more than fifty books, including "War and the World: Military Power and the Fate of Continents, 1450-2000" (Yale, 2000), "The British Seaborne Empire" (Yale, 2004), "Maps and History" (Yale, 2000), and "European Warfare in a Global Context, 1600-1815" (Routledge, 2007). He lives in Exeter.