Items related to Social and Cultural Anthropology: The Key Concepts... 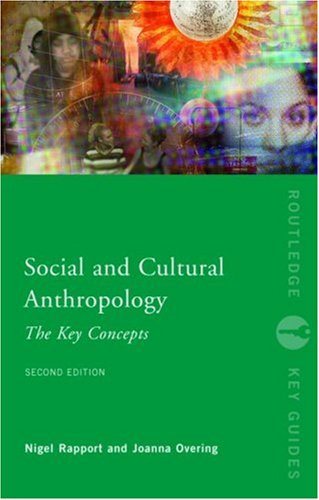 Social and Cultural Anthropology: The Key Concepts is an easy to use A-Z guide to the central disciplines students will encounter in this field. Fully updated, the second edition includes new entries on:

With full cross-referencing and revised further reading highlighting the latest writings in Social and Cultural Anthropology, this is the ideal resource for anyone studying or teaching this subject.

Praise for the second edition:

"For many anthropologists, the existence of this second edition might serve as an inspiration for the making of an anthropology of their own hearts and minds.  The suggested landscape calls for a pursuit of personal disciplinary interests and explorations that make sense and knowledge of the self, other and world are mutually implicated.  As such, it is a book for students and professionals alike." -Social Anthropology

Praise for the first edition:

'Well written, full of ideas, often interesting and provocative. It should be of use to both teachers and advanced students of anthropology.' - Journal of the Royal Anthropological Institute

Nigel Rapport and Joanna Overing are both Professors of Social Anthropology at the University of St Andrews. Nigel Rapport is the author of numerous books on anthropology, including Transcendent Individual: Essays Toward a Literary and Liberal Anthropology (1997) and, with Anthony P Cohen, Questions of Consciousness (1995). Both are published by Routledge. Joanna Overing is the author of many publications on Amazonia and on anthropological theory. She is the editor of the volume Reason and Morality (Routledge, 1985), and also, with Alan Passes, of The Anthropology of Love and Anger: The Aesthetics of Conviviality in Native Amazonia (Routledge: 2000).