Items related to On Religion (Thinking in Action)

On Religion (Thinking in Action) 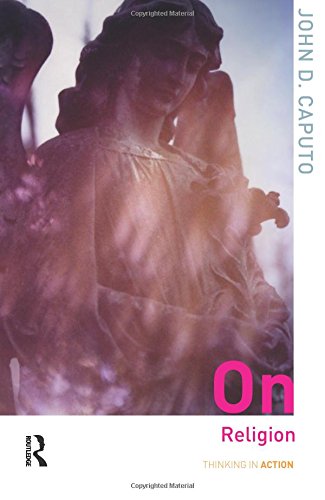 John D. Caputo explores the very roots of religious thinking in this thought-provoking book. Compelling questions come up along the way: 'What do I love when I love my God?' and 'What can Star Wars tell us about the contemporary use of religion?' (are we always trying to find a way of saying 'God be with you'?) Why is religion for many a source of moral guidance in a postmodern, nihilistic age? Is it possible to have 'religion without religion'?
Drawing on contemporary images of religion, such as Robert Duvall's film The Apostle, Caputo also provides some fascinating and imaginative insights into religious fundamentalism.

"Caputo redefines religion as love of the unforeseeable. And, as that is a given in life, his definition of religiosity pretty much equates with my definition of joie de vivre. So the opposite of a religious person is not an atheist, merely a 'pusillanimous curmudgeon'. But it's not all just clever wordplay. With his unorthodox definitions in place, Caputo goes on to denounce dogma, put Marx, Nietzsche and Freud in their historical places and to reunite religion, mysticism and science. On top of all that, there's a detailed deconstruction of religion in Star Wars. I'm converted."
- Laurence Phelan, The Independent on Sunday

"Intellectual without being overly academic...one cheers his vigour and relishes his insights into the paradoxical, ambiguous nature of religion and religious belief. Recommended."
- Library Journal

"I feel obliged to warn readers that I loved this book. I loved its passion, loved its ideas, and loved the alternately sassy and incantatory rhythms of its prose ... get this book and read it."
- Sea of Faith

"...this volume is both a stimulating read and a useful introduction to a strand of thinking about religion inaugurated by Jacques Derrida and other post-modernist thinkers.  Caputo's writing avoids the abstractions and complications beloved of academic philosophy in favor of a vernacular and often light-hearted writing style that nevertheless succeeds in conveying ideas of considerable depth and subtlety."
- Stan van Hooft, Sophie, 48:327-329

This is an accessible account of religion and religious thinking. The text addresses problems, such as the flourishing of religion in popular culture alongside the "religious" duty many feel to be critics of religion. The book investigates the roots and foundations of religious culture and asks key questions such as: " What do I love when I love my God?"; "What can Star Wars tell us about the contemporary use of religion?"; "Are we always trying to find a way of saying 'God be with you'?"; and "What is it to perform an act 'in the name of God'?" The uses of religion in modern times are explored and the text asks why it is for many people, a source of moral guidance in a postmodern, nihilistic age. Drawing on contemporary images of religion, such as Robert Duvall's "The Apostle", the author also provides various insights into religious fundamentalism and examines what it means and why it is happening.

1. On Religion (Thinking in Action)

2. On Religion (Thinking in Action)

3. On Religion (Thinking in Action)

4. On Religion (Thinking in Action)