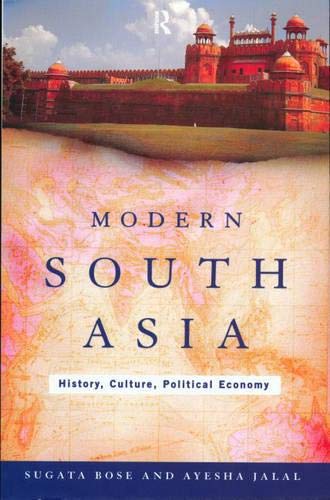 The South Asian subcontinent is home to nearly a billion people and has been the site of fierce historical contestation. It is a panoply of languages and religions with a rich and complex history and culture.
Drawing on the newest and most sophisticated historical research and scholarship in the field, Modern South Asia is written in an accessible style for all those with an intellectual curiosity about the region. After sketching the pre-modern history of the subcontinent, the book concentrates on the last three centuries from c.1700 to the present. Jointly written by two leading Indian and Pakistani historians, it offers a rare depth of historical understanding of the politics, cultures and economies that shape the lives of more than a fifth of humanity.

The South Asian subcontinent is home to nearly a billion people, just over 23 per cent of humanity, and has been the site of fierce historical contestation. It is a panoply of languages and religions with a rich and complex history and culture. This text is a social, economic, political and cultural history of South Asia from around 1700 to the present. It debates and challenges the controversial issues in the region's history, such as nationality, identity, and state-building. In the 50 years since Indian independence and partition in 1947, political and ideational contests over the wealth, history and idea of India have intensified both within and outside the area. Recent economic reforms in India and Pakistan have turned the region into the largest emerging market after China. The text is a work of synthesis and interpretation which covers India, Pakistan, Bangladesh, Sri Lanka, the Maldives, Nepal and Bhutan from an interdisciplinary perspective. The authors offer an understanding of the sophisticated historiography of this startegically and economically significant part of the world.