Items related to Perspectives in Sociology: Classical and Contemporary

Perspectives in Sociology: Classical and Contemporary 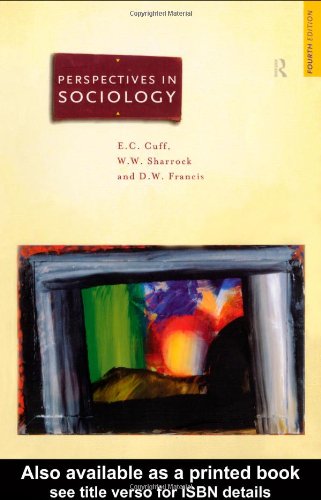 Perspectives in Sociology provides students with a lively and critical introduction to sociology and to the ways in which sociologists are trained to think and work. The subject is presented as a sequence of different perspectives on the social world, all of them interrelated, sometimes in conflict with one another, and all contributing important and necessary insights. The discussion is backed up by extensive reference to empirical studies.
This edition has been considerably revised. A chapter on critical theory has been added in order to reflect the extensive work and thinking that Marx's basic work continues to stimulate. The chapter on research strategies now takes account of new developments in the philosophy of science that are relevant for sociological approaches. Throughout, the authors have rewritten extensively in their continuing desire to produce clarity, and to respond to the comments of students and teachers.

"There have been many substantial changes in the discipline. The opening up of new concerns and the questioning of established perspectives and methodologies. I think that this new edition captures effectively the nature of these new concerns, takes the debate forward, and presents them usefully to new undergraduates." -David Newton, Staffordshire University

From its first edition in 1979, Perspectives in Sociology has provided generations of undergraduates with a clear, reassuring introduction to the complications of sociological theory. This fourth edition has been wholly rewritten and restructured. While retaining its wealth of information about the founding figures of sociology it also includes much new material on contemporary social theory and particularly the challenge to sociology posed by the rise of post-structuralism with its questioning of the whole enlightenment project. New features include: a concise introduction to the major debates of the twentieth century information on thinkers of the nineteenth and early twentieth century whose relevance to modern social thought is only now being recognised, e.g. Nietszche, Saussure, Simmel key debates placed in historical and philosophical context connections drawn between post-structuralist thinkers like Foucault and Derrida and the founding figures of sociology: Marx, Weber and Durkheim new easy to read format four wholly new chapters tracing developments in social theory from structuralism to postmodernism.

2. Perspectives in Sociology: Classical and Contemporary

3. Perspectives in Sociology: Classical and Contemporary