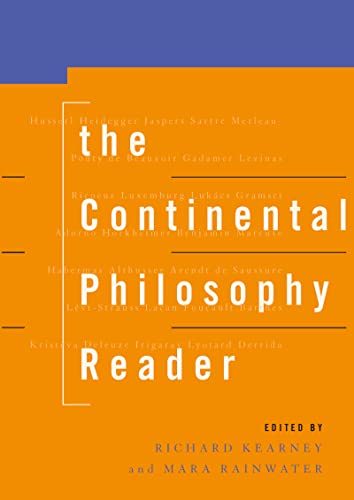 The Continental Philosophy Reader is the first complete anthology of classic writings from the major figures in European thought and provides a powerful introduction to one of the 20th century's most influential intellectual movements.

"Finally, there is a substantive, inexpensive single volume available to us that covers more than just a single school or movement in twentieth-century European philosophical thought ... I highly recommend this book."
-David Boersema, "Teaching Philosophy

The Continental Philosophy Reader is the first comprehensive anthology of classic writings from the major figures in European thought.

The Reader is divided into three sections: From Phenomenology to Hermeneutics From Marxism to Critical Theory From Structuralism to Deconstruction Within the sections are found the key thinkers and writings of these movements: Husserl on Phenomenology Heidegger from Being and Time Jaspers from the Philosophy of Existence Sartre on Existentialism Merleau-Ponty from Phenomenology of Perception de Beauvoir from The Second Sex Gadamer on Hermenuetics Levinas on Ethics Ricoeur on Interpretation Luxemborg on Marxism Lukacs from History and Class Consciousness Gramsci on Intellectuals Adorno & Horkhiemer from the Dialectic of the Enlightenment Benjamin on History Marcuse from Eros and Civilisation Habermas on Philosophy Althusser from Reading Marx Arendt from Between Past and Future de Saussure on Signs Levi-Strauss on Myth Lacan on the Mirror Stage Foucault on Power Barthes on Semiology Kristeva on Women's Time Deleuze on Philosophy Irigaray on the Feminine Lyotard on the Postmodern Derrida on Deconstruction The selections have been carefully chosen to be representative of the thinkers,and each selection is introduced and placed in their historical and philosophical context by the editors.There is also a helpful chronology that allows the tradition to be seen in light of the Twentieth Century thought and culture.Ideal for introductory courses in Continental Philosophy and Contemporary European Thought,The Continental Philosophy Reader provides a powerful introduction to one of the Twentieth Century's most influential and controversial intellectual movements.