Items related to The Collected Papers of Bertrand Russell, Volume 10:...

The Collected Papers of Bertrand Russell, Volume 10: A Fresh Look at Empiricism, 1927-1946

The Collected Papers of Bertrand Russell, Volume 10: A Fresh Look at Empiricism, 1927-1946 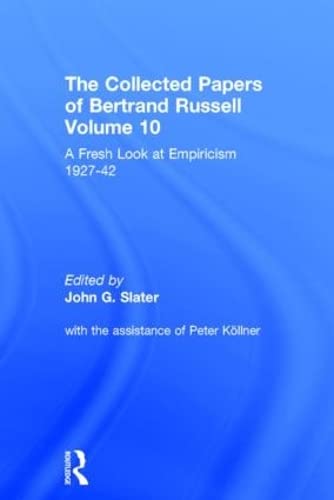 During the period covered by this volume, Bertrand Russell first retired from and then resumed his philosophical career. In 1927 he published two philosophy books, The Analysis of Matter and An Outline of Philosophy. His next book in academic philosophy, An Inquiry into Meaning and Truth, was not published until 1940.
Yet, Russell published a significant amount of essays and popular books between 1927 and 1946, mostly to finance the running of Beacon Hill School, and his growing family. Those years also saw his break-up with Dora Russell, his marriage to Patricia (Peter) Spence and a move of the family to the United States.
Volume 10 brings together Russell's writings on ethics, politics, religion and academic philsophy. It is an invaluable guide to the thought and development of one of the most famous philosophers of this century.

"This is a volume of immense importance and distinction. In combination with volume 11, it is a powerful indictment of those who believe Russell's philosophical work was barren between 1927 and 1940.."
-Bertrand Russell Society Newsletter, February 1998
"an extraordinarily ambitious undertaking... Up to now, 12 volumes have been produced, every one a model of diligent scholarship and handsome production.."
-Times Higher Education Supplement, December 13 1996

Bertrand Russell (1872-1970) was born in England and educated at Trinity College, Cambridge. His long career established him as one of the most influential philosophers, mathematicians, and social reformers of the twentieth century.

Andrew Filev is President of dotSITE Software. This company specializes in cost-effective development on the .NET platform. Andrew's team has been developing commercial solutions using .NET since the first public announcement of this new Microsoft strategy. Andrew set up one of the first .NET portals, and has held a number of seminars and lectures dedicated to .NET in state and private companies.
Andrew has implemented numerous solutions in various high-tech fields - Web Services, ERP applications, medical systems, development frameworks, among others. He can be reached at andrew@dotsitesoftware.com or www.dotsitesoftware.com.

Tony Loton works through his company LOTONtech Limited (http: //www.lotontech.com) as an independent consultant, course instructor, and technical writer. The current area of interest at LOTONtech is the enhancement of UML visual modeling tools - specifically Rational Rose and Visio for Enterprise Architects - to facilitate .NET application design. Further details can be found at http: //www.lotontech.com/visualmodeling.
Tony graduated in 1991 with a BSc. Hons. degree in Compute r Science and Management and he currently holds an appointment as associate lecturer with the Open University in the UK.

Kevin McNeish is President of Oak Leaf Enterprises, a company that specializes in object-oriented developer tools, training, and software. He started his programming career twenty years ago working with Assembly Language, then moved to C, Visual FoxPro, and currently uses C# as his primary .NET development tool. He authored the book,"NET for Visual FoxPro Developers" and teaches both .NET and UML training classes in North America and Europe.
He hasalso written UML articles for "CoDe," "FoxPro Advisor," and "FoxTalk" magazines. Kevin, a Microsoft MVP, is the creator of a .NET business application framework called "The Mere Mortals Framework for .NET." He also mentors software companies in a variety of vertical markets to design and build component-based applications that scale from the desktop to the Internet. He can be reached at oakleaf@oakleafsd.com or www.oakleafsd.com.

Benjamin Schoellmann credits his move to sunny Houston, Texas, with providing the inspiration necessary to pursue a development and writing career. Currently he is involved with evangelizing .NET technologies among his coworkers at Synhrgy HR Technologies. Among his favored activities are golfing, tinkering with his network, talking incessantly, and integrating hardware and software solutions, primarily home automation, to enhance his leisurely pursuit of Slack. He maintains several content-free WEB domains, including Benjammin.com. He is obsessive about keeping pace with emerging technologies, and is very quick to credit his developer friends with all his success in the IT field.

John Slateris a project manager at Management Reports International in Cleveland, OH. At MRI he is currently developing applications for the property management industry. Right now, he is working on several projects using .NET development tools and .NET Enterprise servers.
In his free time John enjoys outdoor activities and playing with his children Rachel and Nathan. He can be reached at jr_slater@hotmail.com.

Chaur G. Wu currently works for Trend Micro Inc. as a senior software engineer. He started software programming before was old enough to qualify for a drivinglicense. The first program he wrote was a bingo game - in assembly code on a 8051 single chip. To capitalize on the program, he ran a small casino in the lab - he developed primitive game boxes that connected his pals and allowed them to place bets.
He's also been involved in much larger projects. For example, he developed a program in C++ to simulate the movement and geographical coverage of GPS satellites. As a research assistant in his graduate study, he implemented a wavelet-based video compression algorithm for a traffic surveillance system sponsored by Boston City Department of Transportation. He also helped solve a blurred image problem using inverse filters and other image processing algorithms for a client who designs fiber optics components in San Jose, CA.
His technical interests include distributed software systems in Java, COM, and .NET, generative programming, software design, and neural networks. Outside of work, his favorite vacation combines a one-night gambling trip to Reno followed by a day of skiing at some resort near Lake Tahoe. You can e-mail Chaur at cha_urwu@hotmail.com.