Items related to Religion of the People: Methodism and Popular Religion... 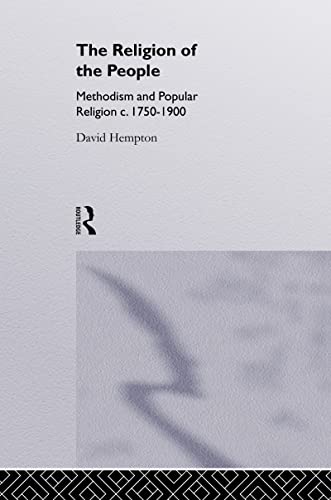 Methodism was the most important religious movement in the English-speaking world in the eighteenth and nineteenth centuries. It helped reshape the old denominational order in the British Isles and North America and deeply affected the lives of many millions of people. Although taking account of broader patterns of growth, the focus of this book is Methodism in the British Isles in the period 1750-1900. David Hempton begins with a discussion of why Methodism grew when and where it did and what was the nature of the Methodist experience for those who embraced it. The distinctive religious beliefs and practices of Methodism appealed mostly to women and men of the lower middle and working classes, and its harsh disciplines and tender pieties have been closely related to many other important questions such as class formation, increased political consciousness, the rise of industrial capitalism and market economies, and the growth of religious pluralism. Hempton considers four of the important figures in the early history of Methodism: John Wesley, the founder; Jabez Bunting, the most powerful man in the connexion in the nineteenth century; Thomas Allan, the connexional lawyer and political adviser; and Gideon Ouseley, a representative of the much neglected order of itinerant preachers who spread the Methodist message. The Religion of the People concludes with an exploration of the themes of law, politics and gender which lie at the heart of Methodist influencee on individuals, communities and social structures.

""Religion of the People is an extraordinarily good book--distinguished for the lucid complexity of its arguments as well as for its compelling use of wide-ranging sources. Hempton resists the urge--which has in fact overpowered some very good historians before him--to oversimplify the rise and spread of evangelical Protestantism. Instead, he roots his analysis of evangelical themes, personalities and commmunities in multiple layers of causation. Whether on the religious character of Methodist experiences, the dynamics of itinerant preaching, the differences between evangelicals in various regions of Britain, Ireland, and North America, the indispensable contribution of women to the rise of evangelicalism, the legal status of eighteenth-century Methodists, or a wealth of other subjects--this is historical writing at its very best."
-Mark A. Noll, Professor of History, Wheaton College
"Those who want the latest word on Methodism's first century can do no better than turn to this collection of essays by David Hempton. Written in a crisp, incisive prose, lucidly-argued without oversimplification, unobtrusively learned, they offer the clearest path through the jungle of Methodist studies . . . These essays are a pleasure to read because of Hempton's undogmatic inquisitiveness, his balanced appreciation of Methodism's many-sidedness, and his ability to empathize without ever becoming sentimental or romantic."
-Hugh McLeod, University of Birmingham

David Hempton is Professor of Modern History in the Queen's University of Belfast. He is the author of Methodism and Politics in British Society 1750-1850 (London, 1984), co-author of Evangelical Protestantism in Ulster Society 1740-1890 and contributor of a number of articles on the religious history of Britain and Ireland in the modern period. He is a fellow of the Royal Historial Society.

Book Description Taylor & Francis Ltd, United Kingdom, 1996. Hardback. Condition: New. New. Language: English. Brand new Book. Taking account of broader patterns of growth, the focus of this book is Methodism in the British Isles. Hempton discusses why Methodism, the most important religious movement in the English-speaking world in the 18th and 19th centuries, grew when and where it did and what was the nature of the Methodist experience for those who embraced it. He also explores the themes of law, politics and gender which lie at the heart of Methodist influence on individuals, communities and social structures. Seller Inventory # LHB9780415077149

3. Religion of the People

9. Religion of the People

10. Religion of the People