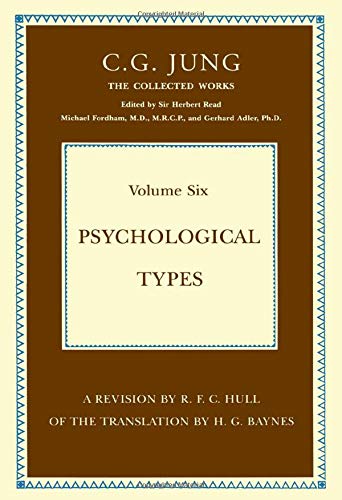 Psychological Types is one of Jung's most important and most famous works. First published by Routledge (Kegan Paul) in the early 1920s it appeared after Jung's so-called fallow period, during which he published little, and it is perhaps the first significant book to appear after his own confrontation with the unconscious. It is the book that introduced the world to the terms 'extravert' and 'introvert'.

Though very much associated with the unconscious, in Psychological Types Jung shows himself to be a supreme theorist of the conscious. In putting forward his system of psychological types Jung provides a means for understanding ourselves and the world around us: our different patterns of behaviour, our relationships, marriage, national and international conflict, organizational functioning.

Appearing in paperback for the first time this central volume from Jung's Collected Works will be essential to anyone requiring a proper understanding of Jung's psychology.

The book is rich in material drawn from literature, aesthetics, religion, and philosophy. The extended chapters that give general descriptions of the types and definitions of Jung's principal psychological concepts are key documents in analytical psychology.

Book Description Paperback. Condition: Very Good. The book has been read, but is in excellent condition. Pages are intact and not marred by notes or highlighting. The spine remains undamaged. Seller Inventory # GOR001338364

Book Description Paperback. Condition: Good. Connecting readers with great books since 1972. Used books may not include companion materials, some shelf wear, may contain highlighting/notes, may not include cdrom or access codes. Customer service is our top priority!. Seller Inventory # S_312950772

Book Description Condition: Good. A+ Customer service! Satisfaction Guaranteed! Book is in Used-Good condition. Pages and cover are clean and intact. Used items may not include supplementary materials such as CDs or access codes. May show signs of minor shelf wear and contain limited notes and highlighting. Seller Inventory # 0415071771-2-4

Book Description Paperback. Condition: Good. Minor shelf wear Good condition is defined as: a copy that has been read but remains in clean condition. All of the pages are intact and the cover is intact and the spine may show signs of wear. The book may have minor markings which are not specifically mentioned. Most items will be dispatched the same or the next working day. Seller Inventory # wbb0017039429

Book Description Paperback. Condition: Good. Item is in good condition. Some moderate creases and wear. This item may not come with CDs or additional parts including access codes for textbooks. Might be an ex-library copy and contain writing/highlighting. Photos are stock pictures and not of the actual item. Seller Inventory # DS-0415071771-3