Items related to J.L.Austin (Arguments of the Philosophers)

J.L.Austin (Arguments of the Philosophers) 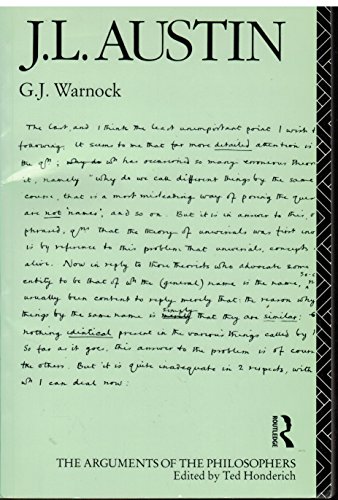 Sir Geoffrey Warnock presents here a critical survey of the work of the late J.L.Austin, one of the great innovative figures of British philosophy from 1945 until his early death in 1960, and a leader in his field not only in this country but in America and throughout the English-speaking world. He deals particularly with Austin's original and influential contributions to the philosophy of language, but also examines his important papers on a wide range of other topics in epistemology and the philosophy of the mind. Warnock was Austin's successor as a tutor of Magdalen College, Oxford, and after 1960 was much involved in editing and preparing his writings for publication. His assessment of Austin's aims and achievements is founded on long and first hand acquaintance with both the man and his work. This book should be of interest to teachers and students of philosophy and linguistics.

Book Description Routledge. Paperback. Condition: Good. A copy that has been read, but remains in clean condition. All pages are intact, and the cover is intact. The spine may show signs of wear. Pages can include limited notes and highlighting, and the copy can include previous owner inscriptions. At ThriftBooks, our motto is: Read More, Spend Less. Seller Inventory # G0415063892I3N00

5. J. L. Austin (The Arguments of the Philosophers)

Book Description Routledge, 1991. Condition: Good. A+ Customer service! Satisfaction Guaranteed! Book is in Used-Good condition. Pages and cover are clean and intact. Used items may not include supplementary materials such as CDs or access codes. May show signs of minor shelf wear and contain limited notes and highlighting. Seller Inventory # 0415063892-2-4