Items related to Becoming a Profession: History of Art Therapy in Britain,...

Becoming a Profession: History of Art Therapy in Britain, 1940-82 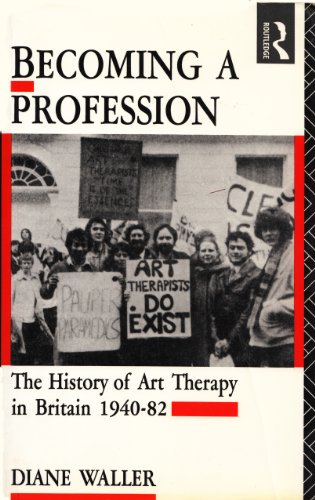 Published in 1991 in Great Britain by Routledge, 290pp, ISBN 0415058201, this book 'Becoming a Profession: The History of Art Therapy in Britain 1940-82' was written by Diane Waller. Britain was the first country to recognise art therapy as a profession in the state health service, and the British example continues to serve as a model for other countries wishing to develop on similar lines. Becoming a profession is the first comprehensive historical account of the way in which art therapists achieved recognition and the strategies they employed to establish their training. It covers the period from 1940, when the term was first used in Britain, to 1982, when the Whitley Council granted art therapy its own career and salary structure. Diane Waller draws on a vast amount of previously unpublished material to show how the disciplines of art education, psychiatry and psychoanalysis were influential in giving rise to notions of 'art as healing' and 'art as expression'. She includes interviews with some of the founder art therapists of the 1940s and 1950s, and assesses their contribution in detail. She also describes the work of the British Association of Art Therapists (BAAT), and in particular the campaigns for recognition mounted by BAAT in co-operation with the trade union movement. Fascinating reading for all practising art therapists, art therapy teachers and students, Becoming a Profession will also be relevant to anyone interested in the formation and development of professions. Chapters: Part I: Background to Art Therapy; Part II: The Role of Individual Artists and Psycotherapists in the Development of Art Therapy from the 1940s to the formation of BAAT. Part III: Beginning of Organised Activity: The First Working Parties in Art Therapy; Part IV: The Campaign to Establish Art Therapy in the NHS. Part V: Training in Art Therapy; Part VI: Concluding Thoughts. References; Name Index; Subject Index. Diane Waller was Head of the Art Psychotherapy Unit at Goldsmiths

"Becoming a Profession" provides the first comprehensive historical account of the struggle by art therapists to gain recognition and validation for their work within the British state health and education system. It covers the period 1938 to 1982 - from the time when the term was first used in Britain to the assimilation of art therapy by the Whitley Council, with its own career and salary structure. Diane Waller draws on a vast amount of original documentation, on interviews with art therapists, and on a wide range of British art therapy literature in telling the story. By putting the profession of art therapy into an historical context she shows how the profession can be viewed as a living process which can change, rather than a static object liable to become fossilized.

Buy Used
Condition: Good
Ex-library, so some stamps and... Learn more about this copy

Book Description Broché, 1991. Condition: Good. This is an ex-library book and may have the usual library/used-book markings inside.This book has soft covers. In good all round condition. Please note the Image in this listing is a stock photo and may not match the covers of the actual item,500grams, ISBN:9780415058209. Seller Inventory # 5145200

Book Description Routledge, London, 1991. Paperback. Condition: Good. No Jacket. PAPERBACK EDITION. Some creasing to the spine and to the top edge of front cover, a few passages marked in pencil, otherwise a good clean tight copy of this soft-cover book. The first comprehensive history of Art Therapy in Britain from the 1940s to the early 1980s. 290pp. Size: 8vo - over 7ľ" - 9ľ" tall. Seller Inventory # 007152