Items related to A Dictionary of Theatre Anthropology: The Secret Art...

Barba, Eugenio; Savarese, Nicola A Dictionary of Theatre Anthropology: The Secret Art of the Performer

A Dictionary of Theatre Anthropology: The Secret Art of the Performer 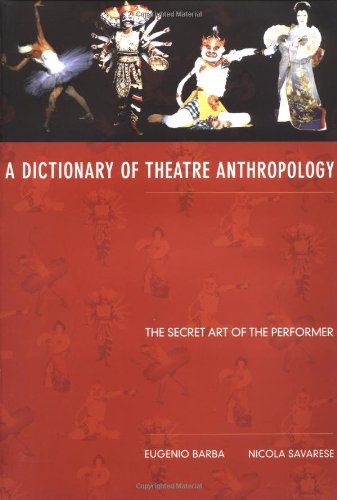 First published in 1991. Routledge is an imprint of Taylor & Francis, an informa company.

"this book is indispensable for any theatre library. It represents some of the most exciting and widely applicable research in the area of theatre anthropology, indeed, it may well be the most important book on acting technique since Barba edited Grotowski's "Towards a "Poor Theatre." -"Journal of Dramatic Theory and Criticism ." . . the entries in the "Dictionary are fascinating flashbulbs, shedding light on myriad ways of performing--breathing in "noh, eye movement in "kathakali, balance in Indian "bharatanatyam . . . For actors grounded in 20th-Century American realism, this plethora of body-based . . . information could prove (literally) eye-opening. Particularly persuasive is Schechner's essay on restoration of behavior'." -"American Theatre

EUGENIO BARBA (1936) Italian born, emigrated to Norway in 1954 where he worked as a welder and seaman. From 1961 to 1964, he followed Jerzy Grotowski’s work in Poland, publishing the first book about him, In Search of a Lost Theatre (1965). In 1963, after spending 6 months in India, he published an essay on kathakali, a theatre form previously unknown in the West. In 1964 he founded Odin Teatret in Oslo, transferring it in 1966 to Holstebro (Denmark) as the Nordisk Teaterlaboratorium. He has directed 32 productions which have been regularly presented in Europe, Asia, North and South America. In 1979 he founded ISTA, the International School of Theatre Anthropology, an itinerant institution with actors, dancers, musicians and scholars interested in investigating the principles of scenic presence. He has written many books and articles, amongst which The Paper Canoe. A Guide to Theatre Anthropology (Routledge 1994), Theatre: Solitude, Craft, Revolt (Black Mountain Press 1999) and Land of Ashes and Diamonds. My Apprenticeship in Poland (Black Mountain Press 1999). He has received numerous international awards and honorary doctorates.

Nicola Savarese was born in Rome. Professor at the University Romatre (Rome), he teaches History of Theatre and Performance at Department of Performing Arts. His studies deal with the complex dynamic of the meetings between Asian theatres and Occidental theatre and the contemporary performers in different contex. He as travelled widely in Asia and particularly in Japan, where he lived for two years. On the relationship between Oriental and Occidental theatres he has published, among many other works, Teatro e spettacolo fra Oriente e Occidente (Theatre and Performance Beyond the Sea, Roma 1992, translated in Spanish), Parigi/Artaud/Bali (L’Aquila 1997), Training (Roma 2004). He is permanent member of ISTA (International School of Theatre Anthropology) since its foundation and he is editor of review Teatro e storia. He was guest scholar at Getty Research Institute in Los Angeles in 1999.

1. A Dictionary of Theatre Anthropology: The Secret Art of the Performer

2. A Dictionary of Theatre Anthropology: The Secret Art of the Performer