Items related to Being and Nothingness: An Essay on Phenomenological...

Sartre, Jean-Paul Being and Nothingness: An Essay on Phenomenological Ontology (Routledge Classics)

Being and Nothingness: An Essay on Phenomenological Ontology (Routledge Classics) 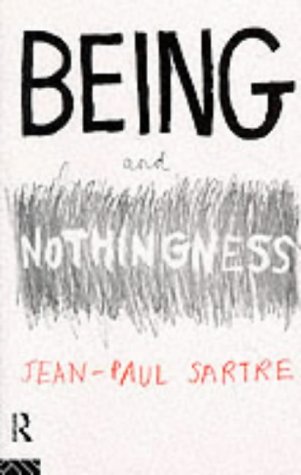 Being and Nothingness may well be thought of as Sartre's greatest work; it has also come to be regarded as a text-book of existentialism itself, and this is for many reasons a proper way to read it. These pages set out with relative perspicuity almost all of the salient ideas of existentialism; and, in addition, the method according to which the book is composed is itself highly characteristic of existentialist philosophers."
From the Introduction by Mary Warnock

'A fascinating and intriguing work providing a full-blown metaphysic backed by, and at the same time providing the basis for, a complete theory of man' - Times Literary Supplement

Born in Paris in 1905 Jean-Paul Sartre was one of the great philosophers of the twentieth century and a renowned novelist, dramatist, and political activist. As a teenager Sartre was drawn to philosophy after reading Henri Bergson’s Time and Free Will, earning a degree in philosophy in Paris at the École Normale Supérieure in 1929. His first novel La Nausée, which Sartre considered one of his best works, was published in 1938. Sartre served as a meteorologist in the French army before being captured by German troops in 1940, spending nine months as a prisoner of war. After his release, he was involved in the resistance movement before publishing his great trilogy of novels, Les Chemins de la Liberté. In 1964, Sartre was awarded the Nobel Prize in Literature but declined it. During the events of 1968 he was arrested for civil disobedience but swiftly pardoned by President Charles de Gaulle, who said ‘you don’t arrest Voltaire’. He died on 15 April 1980 in Paris, his funeral attracting an enormous crowd of up to 50,000 mourners. He is buried in Cimitière de Montparnasse in Paris.

1. Being and Nothingness: An Essay on Phenomenological Ontology (Routledge Classics) Sartre, Jean-Paul

2. Being and Nothingness: An Essay on Phenomenological Ontology (Routledge Classics)