Items related to A Short History of Ethics: A History of Moral Philosophy...

MacIntyre, Alasdair A Short History of Ethics: A History of Moral Philosophy from the Homeric Age to the Twentieth Century

A Short History of Ethics: A History of Moral Philosophy from the Homeric Age to the Twentieth Century 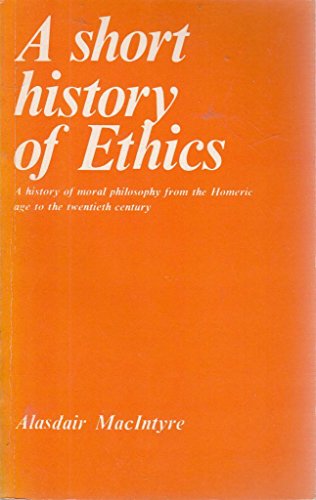 'Very powerful... this book is an impressive contribution to our endless argument about the meaning of ethical concepts,' - The Observer

The author writes...'This history of moral philosophy which runs from the Greeks to contemporary Anglo-Saxon discussion is necessarily compressed and selective, but is intended to enable the general reader and the student to place particular texts in moral philosophy in an historical perspective. The function of this perspective is to clarify three kinds of historical and philosophical connection whose importance is often underrated. The first is a matter of the debts which moral philosophers owe to their predecessors; the second concerns the question of the nature of the moral concepts which furnish any moral philosopher with the objects of his enquiry upon moral concepts themselves and the extent to which the philosophical analysis of a concept may play a part in transforming or even discrediting it. A consequence of these preoccupations is that the book contains a higher proportion of purely philosophical enquiry than might be expected in an historical work.'

1. A Short History of Ethics: A History of Moral Philosophy from the Homeric Age to the Twentieth Century