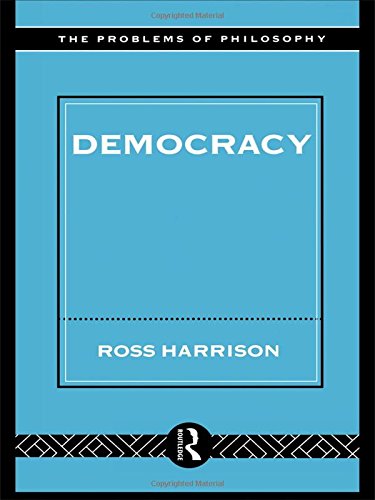 Democracy is today universally considered to be a good thing, yet in history has been frequently been criticized. Ross Harrison argues the merits of democracy by tracing its history from the works of Plato, Aristotle, Hobbes, Locke and Rousseau, The American Federalists and Hume, Bentham, the Mills, Hegel and Marx. This historical perspective provides a repertory of specific problems where democracy converges upon the values of liberty, equality, knowledge and welfare. These same values can be used to argue the benefits and drawbacks of democracy. Any overall assessment must therefore take account of such complexity. "Democracy" shows us how we may navigate between these moral conflicts, by examining the paradoxes and problems that arise and arguing their resolution. Ross Harrison provides a clear analytical justification of democracy, informed by facts and detailed knowledge of the work of major thinkers of the past.

""This is a very good book."o Henry B. Mayo, "Canadian Journal of Political Science."
..." a useful and stimulating introduction to democratic theory which presents difficult ideas clearly ... [Harrison] effectively illustrates the connections between ideas and actual political events."
-"Ethics

Book Description Taylor & Francis Group, 1993. Hardcover. Condition: Good. 1st Edition. Former Library book. Shows some signs of wear, and may have some markings on the inside. Seller Inventory # 8020860-6

Book Description Routledge. Condition: Acceptable. Used - Acceptable. Sticker on cover. Contains staining. Ex-library with wear - may contain significant amounts of highlighting and underlining in pen or pencil. Your purchase helps support Sri Lankan Children's Charity 'The Rainbow Centre'. Our donations to The Rainbow Centre have helped provide an education and a safe haven to hundreds of children who live in appalling conditions. Seller Inventory # Z1-L-003-00602