Cricket's Burning Passion: Ivo Bligh and the Story of The Ashes 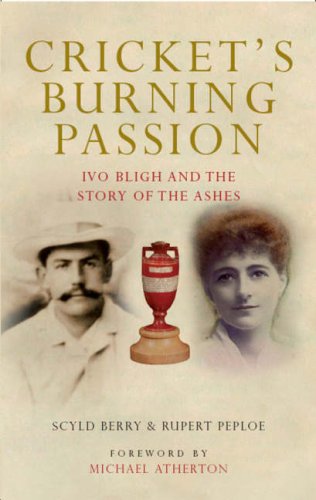 When England's cricketers lost the Oval Test against Australia in the summer of 1882, it triggered a number of cynical comments in the press. The "Sporting Times" stated that 'the body of English cricket had been cremated'. Within a few short months, England had regained the mythical Ashes when the 1882/83 touring party, led by the Hon. Ivo Bligh, later Earl of Darnley, won the Test series 2-1. On the tour, Bligh met a young Australian piano teacher, Florence Morphy, whom he later married. When England's series victory was completed, she presented him with an urn containing the ashes of a bail she had burnt. This is not yet public knowledge, but the authors have authentic documents to substantiate the claim. The book will not be a work of biography but will expand the reader's knowledge of its two very unorthodox main characters. It will describe events of the 1882/83 tour but importantly will describe the role played by Florence, Countess of Darnley, who, in 1882, was 21 years of age and seeking her fortune. Rupert Peploe, the great grandson of Ivo Bligh, has had access to previously unseen diaries of Bligh and his wife as well as hundreds of letters and family memorabilia.

Scyld Berry has been cricket correspondent of the Sunday Telegraph since 1993. Previously he was cricket correspondent of the Observer and has covered every England tour since 1978. He is the author of Cricket Wallah: England's tour of India 1981-2, One Hundred Great Bowlers, and Cricket Odyssey: England's tours 1987-8. Rupert Peploe is the great-grandson of Ivo Bligh and Florence Morphy.

Book Description 2006. Hardcover. Condition: New. Hardcover. was started, and of the equally extraordinary characters who originated it. In the summer of 1882, England regained the Ashes when the 1882/83 touring party, led by the Ivo Bligh, won the .Shipping may be from multiple locations in the US or from the UK, depending on stock availability. 256 pages. 0.520. Seller Inventory # 9780413776273

Book Description 2006. Hardcover. Condition: New. Hardcover. was started, and of the equally extraordinary characters who originated it. In the summer of 1882, England regained the Ashes when the 1882/83 touring party, led by the Ivo Bl.Shipping may be from our Sydney, NSW warehouse or from our UK or US warehouse, depending on stock availability. 256 pages. 0.520. Seller Inventory # 9780413776273