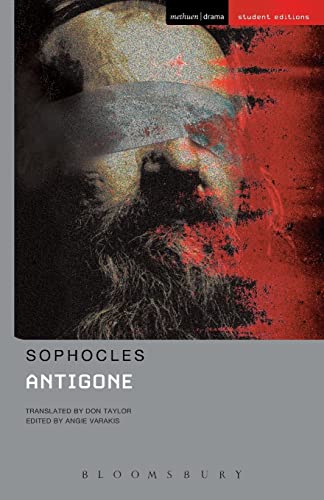 The gods never move faster than when punishing men with the consequences of their own actions.

Desperate to gain control over a city ravaged by civil war, Creon refuses to bury the body of Antigone's rebellious brother. Outraged, she defies his edict. Creon condemns the young woman, his niece, to be buried alive. The people daren't object but the prophet Teiresias warns that this tyranny will anger the gods: the rotting corpse is polluting the city. Creon hesitates and his fate is sealed.

Sophocles' great tragic play dramatises the clash between the family and the city and, with high poetry and deep tragedy, presents an irreconcilable but equally balanced conflict. Sophoclean heroine Antigone has become a cultural archetype, the symbol of personal integrity and an icon of political freedom, whilst her coprotagonist Creon can be interpreted as either a civic saviour or a ruthless tyrant.

This translation by Don Taylor, accurate yet poetic, was made for a BBC TV production of the Theban Plays in 1986, which he directed.

"I highly recommend [Antigone]. Translators Reginald Gibbons and Charles Segal have done a good job in steering a reasonable course between a literal prose rendition and a poetic paraphrase. There is a very good detailed introduction to the play, an essay on the problems of translating it, a glossary of proper nouns, and three appendices about the date, the history of the myth, and how the play was transmitted. As a director, most valuable are the extensive notes that are found in the back of the book [and] stage blockings added to the texts by the editors."―Frank Behrens, Brattleboro Reformer

"These two new additions to Oxford's 'Greek Tragedy in New Translations' series only add to the luster of the previous releases. Each is firmly packed with insightful introductions, comprehensive and numbered notes, glossaries, and up-to-date bibliographies (the plays' texts take up about half of each volume). The collaboration of poet and scholar in each volume produces a language that is easy to read and easy to speak (compare, for instance, the Watchman's first lines in Shapiro and Burian's Agamemnon with those in Lattimore's 1947 translation). Each volume's introduction presents the play's action and themes with some detail. The translators' notes describe the linguistic twists and turns involved in rendering the text into a modern poetic language. Both volumes are enthusiastically recommended for academic libraries, theatre groups, and theatre departments."―Library Journal [starred review of Oresteia and Antigone]

"Sophocles' text is inexhaustibly actual. It is also, at many points, challenging and remote from us. The Gibbons-Segal translation, with its rich annotations, conveys both the difficulties and the formidable immediacy. The choral odes, so vital to Sophocles' purpose, have never been rendered with finer energy and insight. Across more than two thousand years, a great dark music sounds for us."―George Steiner, Churchill College, Cambridge

Antigone, defying her uncle Creon's decree that her brother should remain unburied, challenges the morality of man's law overruling the laws of the gods. The clash between her and Creon with its tragic consequences have inspired continual reinterpretation.This translation by Don Taylor, accurate yet poetic, was made for a BBC TV production of the Theban Plays in 1986, which he directed.

Book Description Paperback. Condition: new. Paperback. Antigone, defying her uncle Creon's decree that her brother should remain unburied, challenges the morality of man's law overruling the laws of the gods. The clash between her and Creon with its tragic consequences have inspired continual reinterpretation. This translation by Don Taylor, accurate yet poetic, was made for a BBC TV production of the Theban Plays in 1986, which he directed. Another great student edition of a classic text. Shipping may be from multiple locations in the US or from the UK, depending on stock availability. Seller Inventory # 9780413776044